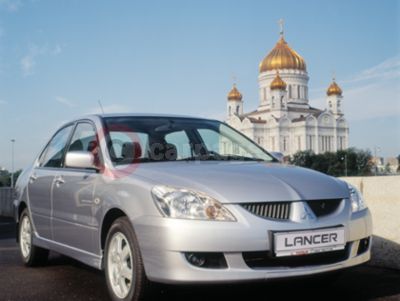 On April 15th, 2005, one of the most coveted automotive awards in Russia went to Mitsubishi Motors: as the best car in its category (C-segment), Lancer was voted "Car of the Year in Russia 2005".

This award was established in 2000 by the automotive monthly "Autopanorama" and later was supported by four other strong titles: "5th Wheel" (automotive monthly), "Russian Newsweek", "Kompania" (both business weeklys) and "Men's Health" (Lifestyle monthly).

In this challenging contest Lancer won aganst it's main competitors, Corolla was 2nd and Mazda3 - 3rd.

"Car Of The Year in Russia 2005" is the third award for the Lancer in Russia which was also voted as the best car of the Russian Motorshow in 2003, by the Russian automotive magazine "Za Rulem" (Behind the Wheel), and "Best Choyce" by "Autobobili. Vybor za Vami" (Your Choice) magazine.

During the first quarter of 2005, Rolf Holding, Mitsubishi Motors´ Distributor for Russia, set a record breaking sales result with 11,924 units (+158 %), pushing Russia to the first place in MME´s Top Ten.

De facto, Mitsubishi Motors moved up from the 5th to the 3rd place for overall quarterly sales and overtook Toyota and Ford (including locally produced Focus).

As a result, Rolf Holding, has become the ?1 importer of foreign cars on the Russian market while Lancer is now No 1 imported car in Russia.

The right car for the Russian customer, Lancer was launched in Europe at the Moscow Motor Show in August 2003. This model is now MME´s second best seller overall in Europe after Colt, with 12,923 units sold during the first quarter of 2005, i.e.: + 64.4 % over the same period of 2004.