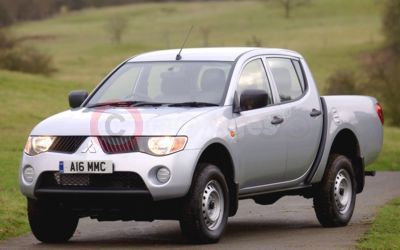 Mitsubishi Motors UK has been presented with the Best Pick-Up award in the 2006 Commercial Fleet World Honours. Beating off all opposition in its class, the new L200 pick-up was announced as the category winner at a high-profile awards ceremony held at the Royal Automobile Club in London’s Pall Mall.

The Commercial Fleet World awards are presented annually to motor manufacturers and service companies which, in the opinion of the judges, have achieved the highest possible level of excellence in their sector.

Judging was carried out by a panel of leading industry experts and members of Fleet World magazine’s editorial team. Each vehicle was carefully assessed on a variety of categories, including quality, reliability and operating costs.

Commenting on the award, Commercial Fleet World editor John Kendall said, "Mitsubishi has done for the pick-up sector what Ford has done for panel vans.

"With the new diesel engine, the new L200 has the performance to match its bold new looks, while fuel consumption is much improved," added Mr. Kendall. "There’s a broad range of specifications, from the no-nonsense 4Work models, to the Elegance - designed to woo SUV drivers. The interior is as radical as the exterior, with a dashboard that has far more in-keeping with a car than a pick-up truck. It’s hard to see how the new L200 can fail."

Jim Tyrrell, Managing Director of Mitsubishi Motors UK responded, "Winning a Commercial Fleet World award reinforces our credibility even further in the fleet market, an endorsement which is very important to us. Mitsubishi has been market leader in this sector for the past five years and judging by the reaction to the all-new model, we will remain number one for many years to come."

The Commercial Fleet World Honours come just three weeks after Mitsubishi took 2006 Pick-Up of the Year at Professional Van & Light Truck Magazine’s award ceremony. Having been on sale for only eight weeks, taking victory in both these industry awards is testament to just how highly the new L200 is regarded.

The L200 continues to out-sell its rivals, with sales exceeding 3,500 units since its introduction in March. Mitsubishi expects to sell over 12,000 of the new model this year in addition to a further 5,000 of the highly successful previous version.

Mitsubishi L200 Images may not be UK specification cars. Colours and exterior and/or interior elements may differ from actual models.