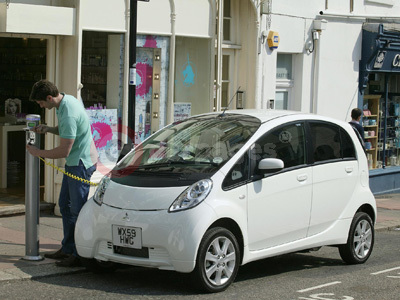 Mitsubishi Motors in the UK is pleased to announce that it has reduced the Mitsubishi i-MiEV's launch pricing to £28,990 for orders placed for delivery from 1st January 2011. This coincides with the UK Government's recently confirmed consumer incentive of £5,000 - which means customers will only have to pay £23,990.

"What is more, our car is perfect for urban driving. It has been designed deliberately as a small, compact, true city car with the ability to nip in and out of traffic and park in the tightest of spaces."

Over 2,300 Mitsubishi i-MiEVs have been operating on Japanese roads since full production started in July 2009 - making Mitsubishi Motors the first manufacturer to mass-produce an electric vehicle in the world.

The Mitsubishi i-MiEV has been proving its reliability and usefulness on the UK's roads since 2007, and has been involved in official government end-user trials since mid-December 2009 with customers in the Coventry and Birmingham area. Some of the key findings of the trial are highly relevant to prospective purchasers of the Mitsubishi i-MiEV.

The Mitsubishi i-MiEVs have been used like a typical UK driver in a petrol or diesel engine car with the majority of journeys are less than five miles. Interestingly, this is when conventional car engines are just warming up and are at their most polluting, and catalytic converters are at their least effective. The average daily mileage has been just 23 miles, which is well within the Mitsubishi i-MiEV's 90 mile range, and drivers use the entire speed range of the car, showing they are happy to drive at motorway speeds when required.

The petrol i-car, upon which the Mitsubishi i-MiEV is based, has won numerous awards for its funky, youthful, energetic design. In the local UK market, this is sure to appeal to customers for whom the latest technology, environmental considerations, and making a definite fashion statement are at the top of their shopping lists.

The Mitsubishi i-MiEVs will all be offered with a range of bespoke accessories to help each car fit the 'personality' of its owner - from roof and wing mirror graphics to enhanced audio / MP3 options, leather interiors and environmentally friendly accessories.