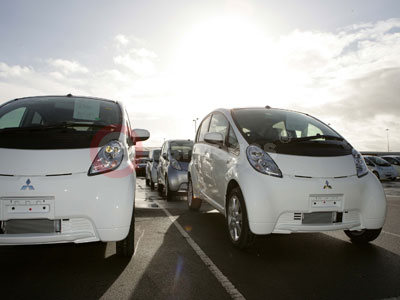 The All Electric Mitsubishi i-MiEV

Excitement is building as the first 25 full production all-electric Mitsubishi i-MiEV's arrive at Bristol's Royal Portbury Docks. Final preparation has already begun before the cars hit the road on 12th December 2009 as part of a West Midlands based government trial.

The Mitsubishi i-MiEV's left Japan by boat six weeks ago and their arrival has been eagerly awaited, especially by the end users and everyone following their progress via Mitsubishi Motors UK's i-MiEV Facebook fan page.

The multi award winning Mitsubishi i-MiEV is a fully electric city car and the first real-life EV with zero tailpipe emissions made available by a mainstream manufacturer. It's a genuine car, ensuring no compromise in cabin space, seating 4 adults and room for luggage. It has a top speed of 81 mph, a range of 100 miles and can be trickle charged from flat to full in 6 hours at any UK three-pin socket - and it only costs 96p for a full charge.

The Mitsubishi i-MiEV, on sale in Japan since July 2009, has been a sell-out success. The 1,400 units allocated by Mitsubishi for the 2009 Japanese market have flown out the door and an impressive 900 orders have already been placed in Japan from the 2010 build allocation.

European production will begin in October 2010 with left hand drive Mitsubishi i-MiEV's available in markets across Continental Europe towards the end of the year.

The cars are taking part in one of the Government's Ultra Low Carbon Vehicle Demonstrator projects, run by the Technology Strategy Board. Through an extensive selection process, members of the public have been selected by consortium partner, Coventry University, to trial the cars for 12 months allowing analysis of driving and charging behaviour.