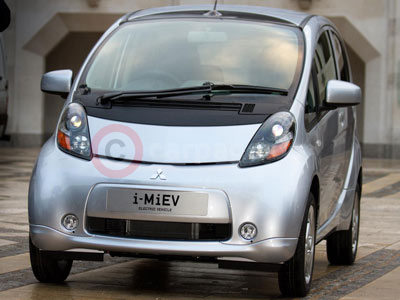 Mitsubishi Motors has announced that the first fully electric vehicle to the UK market, the Mitsubishi i-MiEV has been successful for the Government's Plug In Car Grant (PICG) of £5,000. The Mitsubishi i-MiEV met a wide range of safety, emissions and performance standards and other criteria set by OLEV to qualify for the grant.

The coalition Government announcement of eligible vehicles was made this morning at The Guild Hall in London and will apply to all motorists buying an electric, plug-in hybrid or hydrogen fuel cell car from 1st January 2011. The Government confirmed in October's Spending Review, a provision of over £400m has been made to promote the uptake of ultra-low carbon vehicle technologies.

Mitsubishi Motors UK's Managing Director, Lance Bradley said: "Having the first mass produced fully electric vehicle in the UK market puts us at the forefront of a new era in the automotive industry. We are delighted that the i-MiEV has met the high level of criteria required to qualify for the Plugged In Car Grant. We know from the orders that we have already received that the i-MiEV will appeal to a wide cross-section of private individuals and business users, with its exciting combination of innovation, style and technology".

The European electric vehicle is the first for the UK market and is on sale now priced at £23,990 for orders placed for delivery from 1st January 2011, including the PICG consumer incentive. Mitsubishi Motors has recently announced their contract hire pricing and personal payment plans starting from as little as £399 per month.

From August 2010, UK customers have been able to order the EU type approved Mitsubishi i-MiEV via Mitsubishi's assigned National Electric Vehicle Manager (NEVM) based in London. The NEVM has already taken numerous orders in advance for vehicle deliveries throughout January 2011 from all areas of the car market - retail, small business and large fleets. Mitsubishi are due to announce their UK EV Sales Centres on 23rd December 2010.

In order to gain more information about the usage of electric vehicles, Mitsubishi Motors has been proactively supporting various Government trials since December 2009. This includes the Technology Strategy Board's (TSB) £25m Ultra Low Carbon demonstrator programme in the West Midlands managed by the CABLED consortium.

Mitsubishi Motors contributed by being the first manufacturer to supply a total of 25 electric vehicles fitted with data loggers to independent users as part of the 12 month project. The CABLED consortium tested the vehicles in real-life conditions and although the most up to date results are to be published later this month, latest research from the UK's largest study into long term low carbon vehicles reveals an increase in driver confidence, and gives the first real-world analysis of the cost of 'refuelling' and new information on charging trends.

Mitsubishi Motors has also been in discussion with several councils across the UK supporting the 'Plugged in Places' scheme. 'Plugged in Places' is an initiative to install publicly accessible electric charging points for electric vehicles in cities and regions in the UK. Milton Keynes, London and Newcastle have been successful in the first phase and the successful bidding consortia in the second phase are based in: the Midlands; Greater Manchester; East of England; Scotland and Northern Ireland.