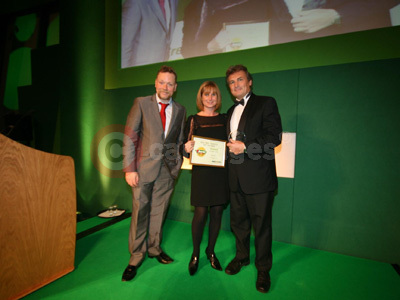 The all-electric Mitsubishi i-MiEV city car has been named Electric Vehicle of the Year at the GreenFleet awards for the second year running. The prestigious award, sponsored by Elektromotive, was presented on 7th October at the Arsenal Emirates Stadium, London.

The Mitsubishi i-MiEV was praised for displaying the 'best performance' and 'best suitability for purpose in its class'. The judges were impressed with its four seat practicality, range and charge time. It also scored highly for the simplicity with which it could be used, thanks to the use of conventional controls and the functional cabin layout.

Mitsubishi Motors' Sales and Marketing Director, Toby Marshall, commented: "We are delighted to win this prestigious award for the second year running. We have been carrying out an extensive demonstration programme with the i-MiEV this year and we have already received a number of orders for the car, with deliveries starting in January 2011.

The Mitsubishi i-MiEV is part of a growing portfolio of environmentally-efficient Mitsubishi models. The Mitsubishi Colt ClearTec was joined this year by the new ASX ClearTec, boasting new technologies that reduce its CO2 emissions,and we look forward to announcing new initiatives in the near future."

The Mitsubishi i-MiEV is a fully electric city car with zero emissions. It's an electric vehicle with no compromise in cabin space - it can comfortably seat 4 adults with room for luggage. It has a top speed of 81 mph, a range of 90 miles and can be trickle charged from flat to full in 6 hours at any UK three-pin socket - and it only costs 96p for a full charge. In addition, the Mitsubishi i-MiEV can be rapid-charged from flat to 80% in just 30 minutes.

The Mitsubishi i-MiEV has been playing a major role in the Government's Ultra Low Carbon Vehicle Demonstrator programme being run by the Technology Strategy Board and is also part of the Low Carbon Vehicle Procurement Programme, funded by the Department for Transport and managed by Cenex.