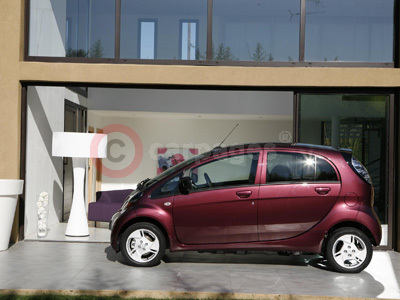 Mitsubishi Motors Corporation has announced the start of production of its European-spec Mitsubishi i-MiEV new-generation electric vehicle along with production of PSA Peugeot Citroen's (PSA) Peugeot iOn and Citroen C-ZERO at its Mizushima Plant.

MMC has been producing and selling the Japan-spec Mitsubishi i-MiEV since last year. With the production of the European-spec models, MMC begins full-fledged export. In fiscal year 2010 (April, 2010 - March, 2011) MMC plans to sell 5,000 Mitsubishi i-MiEV's overseas, this includes models built for PSA.

At a ceremony at the Mizushima Plant, MMC President Osamu Masuko stated "It has been 100 years since mass production of internal combustion-engine cars began. We have taken the first step into the next 100 years of the automobile with the i-MiEV. Today, we take the second step with production for the European market on the way to global rollout of electric vehicles. This is a big step for the automobile industry and at the same time signifies the beginning of e-mobility for Europe."

MMC plans to sell the Mitsubishi i-MiEV in Europe in 14 countries1 including France, the United Kingdom, and Germany from this December, then from fiscal year 2011 sequentially expand the countries it will be sold in.

The European-spec Mitsubishi i-MiEV, in comparison to the Japanese version, contains some differences such as a different front and rear bumper design, added safety features as well as improved stability, as well as a re-arranged center stack in instrument panel for an improved interior feel.

Compared to the Japanese version, the European-spec Mitsubishi i-MiEV has been altered to better suit European requirements, including: a different front and rear bumper design, added safety features such as Active Stability Control (ASC) system, new gear selection, an all-new left-hand-drive dashboard, etc. The European-spec Mitsubishi i-MiEV also achieves a cruising range of 150km under the European NEDC2 driving pattern on one charge.