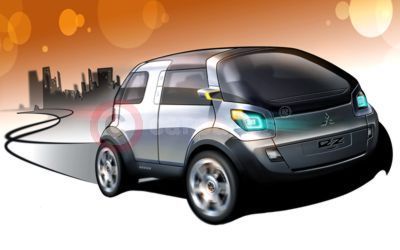 MITSUBISHI Concept-EZ MIEV showcases MMC's MIEV concept for next-generation electric vehicles that employs in-wheel motors and a high-energy-density lithium-ion battery as core technologies. The concept car uses a 20kW outer rotor-type in-wheel motor on each wheel to generate a maximum 80kW (110PS) of power. Maximizing the space freed up by the MIEV design, which does away with a central powertrain thus resulting in a low flat floor layout, MITSUBISHI Concept-EZ MIEV realizes roomy interior space with an interior height that matches that of a large mono-box model despite its relatively low overall height of 1,750 mm.

Colt CZC inherits the basic concept and styling of the Colt coupe-cabriolet concept model displayed by Mitsubishi Motors at the 2005 Geneva Motor Show. Providing space to stow away the retractable hard top in a 2+2 layout, this coupe-cabriolet model joins the European Colt series, including the 5-door Colt hatchback and 3-door Colt CZ3 and Colt CZT hatchbacks, as the third body variation.

Derived from the European Colt series built at the company's NedCar facility in the Netherlands, Colt CZC is to go into production at Pininfarina in Italy in March this year.

The MITSUBISHI Concept-EZ MIEV and Colt CZC will be joined at the Geneva Motor Show by 15 other models including the new L200 pickup truck (built in Thailand, Thai market name: Triton) that will go on sale in Europe in the spring of 2006.