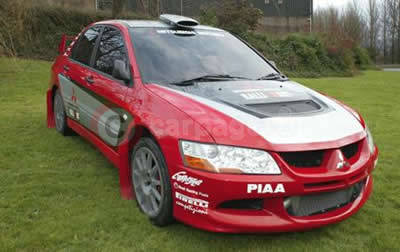 After enjoying a record number of entries in 2004 and producing the most exciting finish so far in the series' four year history, there is no doubt that the Mitsubishi Ralliart Evolution Challenge has become one of the most competitive and high profile rally championships in the UK and this year's series promises to continue where last year's left off.

Once again, the Evolution Challenge will benefit from extensive backing form Mitsubishi Motors UK, the support bringing with it what is widely described as 'the best prize in British Rallying': A fully funded works drive in the 2006 British Rally Championship, behind the wheel of a Group N (the category for production specification cars) Lancer Evolution.

Other awards and technical support will provided by the series' associate sponsors: Walon, PIAA UK, Speedline Corse, Shell Racing Fuels, Mintex and in particular Pirelli, which is increasing its involvement with Mitsubishi this year.

2005 sees Pirelli become the official tyre supplier to the Mitsubishi WRC team and it will continue to support the UK works Group N campaign. In addition, the Evolution Challenge will see a new feature introduced, the Pirelli Cup: An independently scored series which will run within the Challenge, open to competitors who compete using Pirelli tyres throughout the season. Full details and a list of awards will be announced before the opening round.

PIAA UK will continue its support of the junior category, with an award and substantial end of season prize presented to the leading under 25 year old driver.

"Being able to offer such excellent awards makes competing in the Evolution Challenge an attractive proposition." said Series Coordinator, Simon Slade. "We have had a high number of requests for information and regulations, even from foreign teams and I hope that all this interest will see us surpass last year's figure of 40 registrations."

Organisers are pleased to report that for the second year running they have also received considerable interest from Irish competitors, no doubt spurred-on by the achievement of 2004 Champion, Rory Galligan.

General Manager for Ralliart at Mitsubishi Motors UK, Paul Brigden, has been delighted with the way the Evolution Challenge has developed in 2004 and is confident that 2005 will see the series continue to flourish:

"With over 40 registered crews the Evolution Challenge is achieving the targets we have set for it in terms of popularity and profile. If the interest we have have received for this year's series is anything to go by, we predict another highly competitive and successful season ahead."

The Evolution Challenge will continue to follow its successful format, by appearing on all seven rounds of the National Gravel Rally Championship, with the addition of one visit to the British Rally Championship, the Jim Clark Memorial Rally. This programme of eight events will see competitors contest six rallies on gravel and two on asphalt.