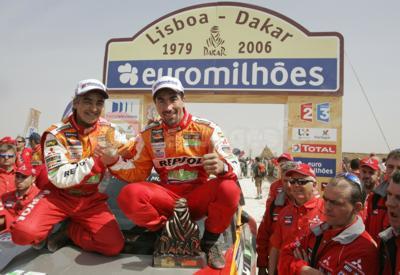 The outright success was the first for Alphand - last year’s runner-up and a former World Downhill skiing champion - and the second for his French co-driver Gilles Picard, who had won the Dakar with fellow Frenchman Jean-Pierre Fontenay in 1998.

The French crew had taken the outright lead between Bamako in Mali and Labé in Guinea, when former Peterhansel crashed into a tree and damaged his rear suspension and transmission. Despite fierce pressure from second-placed South African driver Giniel de Villiers, Alphand took few risks over the closing three days of the 14-stage event to record a winning margin of 17m 53s after the final timed section near Dakar was cancelled.

"My first attempt at the Dakar Rally ended with a seat in a helicopter and I never wanted to be in that position again," said Alphand. "I knew I had a great chance to win. The team worked so hard on the development of our car and I think over the 15 days we were the better all-round team. It’s a fantastic feeling to win the Dakar. I experienced many highs and lows in my skiing career, but this is so different."

Spaniard Roma had joined the Mitsubishi team for his first event in October 2005 and finished sixth on his Dakar debut in a car last year. On this occasion he and Andorra-based co-driver Magne finished a superb third overall in a second Mitsubishi Pajero/Montero Evolution.

"It has been a fantastic race from the start," said Roma. "All the time it has been close, exciting and very difficult for the drivers and the co-drivers. For me it is great to be on the podium. I am part of a superb team at Mitsubishi and everyone has worked so hard to achieve this success."

The French duo of Peterhansel and Cottret had moved into the outright lead of the event on the second of four stages through the Islamic Republic of Mauritania last week. But the eight-times winner struck a tree in ’Black Africa’ and lost over three hours and any chance of taking a hat-trick of wins in Dakar.

"I made a mistake a few days ago and with the level of competition we have seen this year on the Dakar, there was no way I could recover that time," said Peterhansel. "Whether you finish fourth or fifth does not really matter. I am disappointed that I could not complete the hat-trick of wins, but Mitsubishi has won the race and that is the priority. It is also great for Luc and Gilles to take a first win together."

"I am so happy for every member of our team," said Repsol Mitsubishi Ralliart Team President Isao Torii. "I would like to thank everyone for their work and thanks to our partners and sponsors for their efforts. I have been with this team for the last two victories and this was the most exciting of the races. It has been a privilege to be a part of this success and to see the French and Japanese members of the team working together so successfully. Tomorrow we will switch our focus to preparing to win the race for a seventh successive time in 2007."

"Last year I could count our Dakar victories on two hands," joked a delighted Repsol Mitsubishi Ralliart Team Director Dominique Serieys. "But now we have won 11 times I have a missing finger! It was not an easy race, but our entyre team showed complete motivation to reach our target of a sixth successive win. We have a smaller team and a smaller budget than our rivals, but we have performed superbly well."

"I think the deciding factor on this year’s Dakar was our overall team experience and the knowledge of our drivers," said Repsol Mitsubishi Ralliart Team Technical Director Thierry Viardot. "It was very close in the early stages, but I was confident that there were three days in Mauritania where Mitsubishi would have the advantage. We made a wise tyre choice when it mattered, our teams made only minor mistakes in the dunes and with the navigation and they coped well under pressure."