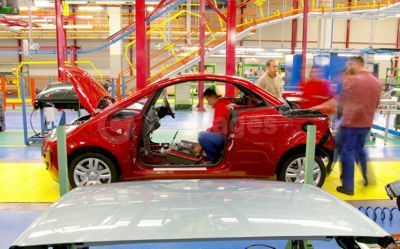 A little over a year after Mitsubishi Motors Europe B.V. (MME), and Pininfarina S.p.A. announced their agreement covering the design, development and production of a convertible version of Colt, both partners celebrate the start of production of the actual car, the 2006 Colt CZC.

From the Netherlands to Italy

Colt CZC is the result of a pan-European effort, as all components that are not built by Pininfarina will be shipped to Italy for final assembly.

Of particular importance, MMC´s NedCar plant in Born (The Netherlands) will not only supply body-in-white components, but also production engineering know-how.

This international teamwork will be as follows:

All in all, 65 % of the Colt CZC parts will be carried over from the Colt family, either 3-door or 5-door.

At this occasion, Tim Tozer said: " We are very honoured to work with Pininfarina on this project. Even though the original idea came from our own designers with the 2003 CZ2 Cabriolet concept, it only became reality through Pininfarina´s involvement."

He added: "Our faithful partner since 1997, Pininfarina brought its impeccable expertise in the fields of roof system engineering and production, as well as its prestigious signature to this third chapter of the Colt story in Europe."

Andrea Pininfarina - CEO of Pininfarina S.p.A - commented: "This project highlights the great confidence Pininfarina has in our long-standing partner, Mitsubishi Motors Corporation. It is also important to stress our complete involvement in all the development phases of this vehicle, from definition of the styling to start-up of production at our Bairo plant. In particular, we worked very effectively with Mitsubishi to incorporate the folding hard-top whilst retaining Colt’s attractive lines."