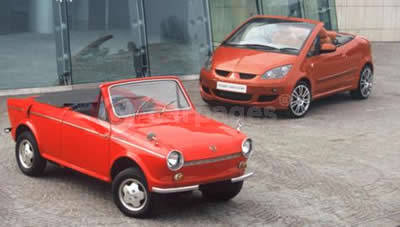 Mitsubishi Motors has released the first images of its new Colt Coupé-Cabriolet concept car. Set to make its debut at the Geneva Motor Show in March, Mitsubishi's latest head-turner will go into production in early 2006 and is expected to land in the UK during the first half of that year. Staring alongside the new model at Geneva will be its more mature 1962 relative - the Colt 600 Convertible - a vehicle which plays an important part in Mitsubishi's history, being the first show car ever to be created by the company!

With production starting at the beginning of 2006, the Geneva Motor Show concept car is very close to final design specification - what is shown in these new pictures will be available to drive on UK roads in less than 18 months time!

Mitsubishi's new Colt Cabriolet will be a 2+2 as per the original CZ2 concept car and will be based off the Colt 5-door platform. Design & engineering has been shared between Mitsubishi Motors Corporation & Pininfarina. No details as yet regarding naming or engine line-up but the turbocharged 147bhp 1.5-litre unit (currently is used Colt CZT) is expected to be part of the range.