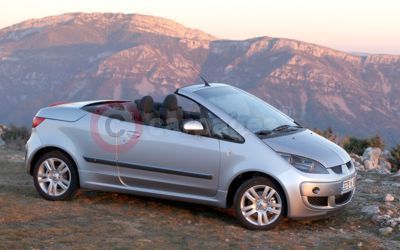 The 76th Geneva Motor Show sets the stage for the world debut of the Mitsubishi Colt CZC cabriolet, the third and arguably most striking member of the award-winning Colt line-up.

Drawing inspiration from the CZ2 and CZ3 Tarmac concept cars that were shown at the 2001 Tokyo and 2004 Geneva motor shows, the Colt CZC features a sleek and sophisticated retractable metal roof that automatically folds back at the touch of a button to provide year-round driving versatility.

The Colt CZC shares its platform and basic architecture with the five-door Colt, taking advantage of its long 2500mm wheelbase and wide 1460mm front and 1445mm rear tracks for a secure and planted on-the-road feel and striking visual stance. Opting for this expansive wheelbase has also resulted in exceptional packaging - the Colt CZC has a 2+2 seating configuration and boasts a pair of occasional rear seats as well as a generous luggage compartment, even when the roof is retracted.

Arriving at UK dealerships in April, the Colt CZC will go on sale with a simple choice of two models – the £13,999 Colt CZC and £15,999 Colt CZC Turbo. Both are powered by an advanced all-alloy 16valve petrol engine, driving the front wheels through slick five-speed manual transmissions with bespoke ratios to maximise the engine’s performance.

The top-line CZC Turbo borrows the 1468cc petrol engine from three-door Colt CZT. Developing 147bhp and 6000rpm and 155lb ft of torque at 3500rpm, the 1200kg CZC Turbo hits 62mph in 8.4seconds and has a 126mph maximum speed. Despite this hot hatch-rivalling performance, it returns 39.8mpg on the combined cycle and has a tax-friendly CO2 rating of 168g/km.

The Colt CZC will be built in conjunction with renowned Italian design house Pininfarina which, along with Mitsubishi Design Europe, played a key role in the design and development of the Colt CZC. Production of the range will start at Pininfarina’s Bairo plant near Turin, on March 7th.