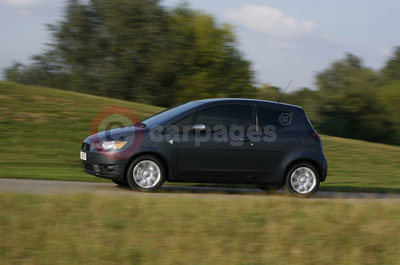 Mitsubishi's next generation Colt is winning friends wherever it goes. Both the 3- and 5-door models have been designed to bring even more style, practicality and performance to this fiercely competitive supermini sector.

Confidence in this good value, well-specified and reliable supermini has been reflected in its forecast residual values. Best-in-class, the new Mitsubishi Colt beats some notable rivals such as the Mazda2, new Ford Fiesta, Toyota Yaris and Vauxhall Corsa.

Outside its more 'traditional' competition the new-look Mitsubishi Colt beats the Ferrari 430 Coupe, Jaguar XF Luxury Saloon and Maserati Quattroporte - retaining up to 22% more of its new value.

The previous generation Mitsubishi Colt's sales success was built on a responsible sales strategy that refused to cave-in to distress selling or big discount fleet and retail deals. In 2007 a healthy 8,698 new Mitsubishi Colts were sold, proving that stock management is key to alleviating stress on used market values.

Lance Bradley, Mitsubishi's Director of Sales and Marketing said: "We are really pleased with these residual values. They underline the strong value of this car both as a new-car proposition and as a used car for the future. It's also a great reward for the way we have responsibly sold the Colt since its relaunch in mid-2004. Beating a Ferrari, Maserati and Jaguar is, of course, a bit of fun but the serious message is that we are top of the pile with all our main competition in the B-segment".

Starting at just £7,749, the next generation Mitsubishi Colt is on sale now with Mitsubishi dealers across the UK. A new 150bhp 'hot hatch' Ralliart version is due in the UK early next year promptly followed by a range of low CO2 emission variants, badged 'ClearTec', with emission levels starting at 115gkm as announced at the Paris Show.