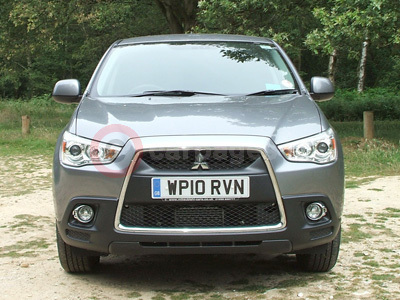 The Mitsubishi ASX is the new crossover from Mitsubishi and as well as sitting alongside the Mitsubishi Outlander, it is also built on the same platform.

Like most crossovers, the reasoning behind its introduction was to bridge the gap between the conventional passenger car and the more rugged off-roaders in the Mitsubishi range. But rather than being just another crossover to rival the likes of the ubiquitous Nissan QASHQAI, the Mitsubishi ASX has one or two tricks up its proverbial sleeve, that makes it that little bit different; and it is not just the superb drive.

Like some of the other crossover manufacturers, Mitsubishi has worked out that people like the commanding position and the appearance of an SUV with off-road capabilities but rarely have a use for a 4x4 system. Many are quite happy to live without the ability to take on the great outdoors and, in return, they save some weight and therefore, benefit from better fuel consumption.

It sounds like a fair deal, so the Mitsubishi ASX is offered with the choice of a 4WD transmission or as a 2WD version, where only the front wheels are driven. In comparison with its stablemate, the 2WD Mitsubishi ASX is slightly shorter than the Mitsubishi Outlander and weighs some 300kg less, and is a good start in reducing fuel consumption. However, add in the Auto Stop & Go, electric power steering, regenerative brakes, LED lighting and stand the car on low rolling resistance tyres and it makes even more difference to the fuel economy.

The Auto Stop & Go system is fairly conventional - the engine cuts out at traffic lights, for instance, and restarts as soon as the clutch is depressed. However, in order to maintain passenger comfort, the ASG doesn't operate if the outside temperature falls below 3-degrees C or, if a speed of 3mph (5kph) is not reached after a restart. Alternatively, it can be switched off when encountering a traffic jam or slow moving traffic where the vehicle is constantly moving and stopping.

Power steering is something that we all take for granted, these days. Mitsubishi has used Electric Power Steering in the ASX as it reduces engine loads and represents a further aid to fuel economy, when compared to hydraulic systems.

Regenerative braking or Generation Control System (GCS) as Mitsubishi calls it, takes kinetic energy that would otherwise be lost during braking or deceleration and converts it into electricity, which is then fed back into the battery. This is a single, conventional battery rather than the bank of Nickel Metal Hydride cells that are found in some hybrids. The energy can then be used when the car is idling, accelerating or simply cruising; thus reducing power generation. This is another way of lowering the fuel consumption and, when the GCS is in action, the alternator is off - it keeps spinning but doesn't put out a charge.

These electronic gizmos, together with the low rolling resistance tyres, play their part with regard to environmental concerns but cleaner engines contribute too and manufacturers are constantly trying to get more from less.

Mitsubishi ASX Images may not be UK specification cars. Colours and exterior and/or interior elements may differ from actual models.