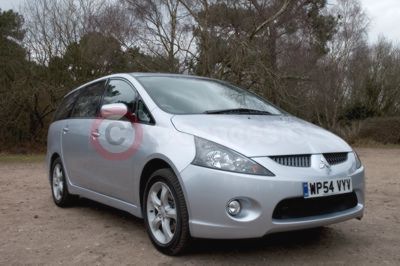 Mitsubishi Grandis Review | Part One
How It Drove - Performance

The Mitsubishi Grandis is powered by a new Euro IV-compliant 2378 cc four-cylinder MIVEC petrol engine, which develops 162 bhp at 6000rpm and 159lb ft of torque at 4000rpm.

This enables the five-speed manual Grandis to accelerate from 0–62 mph in 10 seconds and onto a top speed of 124 mph. When fitted with Mitsubishi’s INVECS II four-speed automatic gearbox, the Grandis can reach 0-62 mph in 11.7 second and a top speed of 118 mph. Fuel consumption for the manual car on combined cycle is 30.1 mpg and for the automatic 28.2 mpg.

The 16v power plant features MIVEC - Mitsubishi’s Innovative Valve Lift and Timing Electronic Control System which features low-speed and high-speed double overhead cams on each camshaft. The cam profiles on the intake and exhaust valve camshafts are switched according to the engine speed, boosting torque at low speeds and increasing power at higher speeds.

We drove the Mitsubishi Grandis 2.4 Elegance automatic, fitted with Mitsubishi’s INVECS-II four-speed semi-automatic gearbox, a £1000 option. The gearbox selector is mounted on the dashboard, and drivers can make their own up or down shifts by nudging the gear lever backwards or forwards.This transmission monitors the drivers style and simulates the decision making process of the human brain by shifting gear accordingly and cleverly reverts to first gear when you stop the vehicle - something the human brain doesn't always remind you to do yourself.

The 2.4 litre petrol engine is smooth and refined and the only real noise is the grunt it gives when accelerating hard. The automatic gearbox was smooth and gear changes where effortless, which was superb when driving in town. The Grandis' fuel consumption is its achilles heel returning around 20 mpg on an urban cycle. If fuel economy is of paramount importance to you then we suggest that you wait for the diesel model which is due to be released in September 2005, with an economical combined fuel consumption figure of 43 mpg when combined with the 6-speed manual gearbox. From initial reports this would be our engine of choice.

The Grandis rides on MacPherson struts at the front and a compact trailing arm rear suspension set up that has been tuned to provide an ideal balance between passenger ride comfort and driver dynamics. At the rear, the independent multi-link suspension consists of trailing, upper and lower arms, and lower toe-control links. Designed to intrude as little as possible into the Grandis’ rear luggage/passenger space, the trailing arm alignment is designed to minimise toe changes for predictable linear performance. Front and rear anti-roll bars are fitted to quell cornering roll.

The Grandis is a little too ponderous for fast enthusiastic ‘B’ road driving and it is more of cruiser which effortlessly eats up the miles. Of course you cannot expect a large MPV to handle like a car but overall we found the handling predictable and safe. For a large MPV body roll is minimal and overall grip was good. However, should you become a little over enthusiastic Mitsubishi have thoughtfully fitted MASC Mitsubishi Active Stability Control (ESP) and MATC Mitsubishi Active Traction Control as standard on Equippe models and above.

Mitsubishi Grandis Images may not be UK specification cars. Colours and exterior and/or interior elements may differ from actual models.