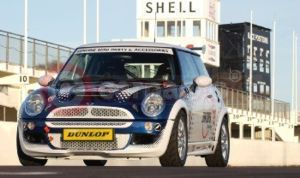 The mighty 200bhp Works MINI Cooper S will make its racing debut in 2004 when it will be introduced into the John Cooper Challenge.

Unveiled at Goodwood Circuit today, 12 of the John Cooper Works prepared racers will share the grid with the existing Clubsport cars next year as the series heads into its third season.

Priced at £26,000, the road legal racecar, which includes a raft of John Cooper Motorsport modifications, will take the Challenge to a new level in terms of performance and prestige.

A new, bigger supercharger, combined with a new cylinder head and revised exhaust system, takes the standard Cooper S from 163 bhp up to a hugely impressive 200bhp at just under 7000rpm.

"What better way to really see what the Works Cooper S can do than on a track," says Mike Cooper, managing director of John Cooper Works. "Given the great sporting heritage of the Cooper name, it was always our intention to introduce the Works Cooper S into racing as early as possible. The 2004 season should be the best yet."

Joining the 140mph examples of the Works Cooper S on the 30-car grid will be 133bhp, upgraded versions of the current, and hugely successful, Clubsport MINI racecar. Both models will race side by side, but compete individually for the S Class and Club Class titles, respectively.

"If past history is anything to go by, we can expect a gaggle of eager racers, challenging for every corner bumper-to-bumper, and smiling every second of the way. I have no doubts that the arrival of the Works Cooper S will merely move the action up a gear…or two," adds Cooper.

The 2004 championship calendar will include a sprint, a hillclimb and 10 races including one double-header in mainland Europe.

The 12 rounds will be condensed into nine weekends, with a number of them being one-day events to keep costs down for competitors. After the car has been built and purchased, a full season of racing with the John Cooper Challenge costs £5,000 plus VAT.

For further information on the John Cooper Challenge visit www.johncooper.co.uk