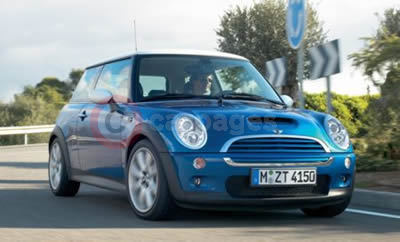 The current-generation MINI, built at the BMW Group Plant in Oxford, has claimed the Used Car Of The Year award, the ultimate accolade in the Auto Express Glass's Guide Used Car Honours 2005. This marks the second year in succession that a British-built car Britain has claimed the award (the Swindon-built Honda Civic won in 2004), underlining the quality manufacturing standards being set by UK-based volume carmakers.

The panel of judges, which relied on detailed Glass’s residual value data to reach their conclusions, said the MINI stood head and shoulders above the other finalists in terms of desirability, build quality and strong resale values. Jeff Paterson, Senior Car Editor at Glass’s, and a leading member of the judging panel, commented, "The MINI has successfully conquered all of the sectors in which it resides, thanks to an attractive range that spreads itself across the supermini, convertible, diesel and sporting markets, and is complemented by MINI’s renowned ‘tlc’ aftersales package."

As well as claiming the Used Car of the Year award, the MINI also retained its crown in the Sporting Car category for the MINI Cooper S variant, and won a Special Award for the second time for the MINI tlc servicing package.

Audi was honoured with an unrivalled hat-trick of awards, in the Compact Executive Car (Audi A4), Coupe (Audi TT), and Convertible (Audi A4 Cabriolet) categories. In a new category for 2005 the Rover 25 took the Bargain Car award. The compact hatchback was recognised by the judges for the availability and affordability that help make five-year old examples an attractive purchase proposition.

Vauxhall was given a Special Award for its Network Q used car retail outlets and website. "A wide choice of makes and models, combined with Vauxhall’s comprehensive approved used car scheme, brings genuine peace of mind for those purchasing a volume-brand vehicle," said Paterson.

Although beaten to the overall Used Car of the Year award by the MINI, the Honda Civic once again claimed the top spot for a used Compact Family Car, while the Honda Jazz won in a hotly contested Supermini category. The Jazz was singled out for setting new standards in engineering and build quality, and for residual values that have remained highly robust since the car was launched.

To be eligible for entry in the Auto Express Glass’s Guide Used Car Honours a vehicle must have been available to buy new for more than 12 months. Evaluation criteria for the awards include: depreciation, whole life costs, practicality, reliability, market sentiment, road test reports and owner feedback. Glass’s provided residual value data on more than 3,000 cars, from which the judging panel drew up their initial shortlist.