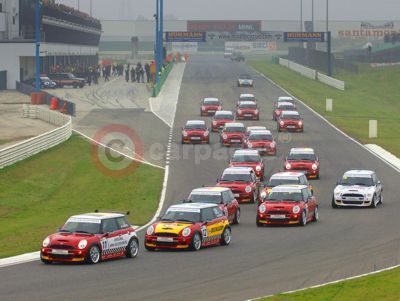 The first international MINI United festival took place this weekend in Italy and 6000 MINI fans attended from more than 40 countries. Most people made the journey in their own car meaning nearly 2000 new MINIs and classic MINIs crowded the Santa Monica racetrack in Misano.

Over 250 MINI owners travelled the 1000-mile journey from the UK joining owners from Thailand, Japan, Australia as well as their European counterparts. The award for the longest drive went to Dimitri Kotov from Moscow who drove 2200 miles to be at MINI United.

The three days of entertainment started on Friday 28 October, and included stunt shows, karting, helicopter rides, blading, live music and dance acts that kept the party going until the early hours of Sunday morning. Yet, the main focus was on the track, whether owners took to the circuit in their own MINIs, experienced a lap with a professional racing driver or watched the MINI Challenge races.

The fastest drivers from the national MINI Challenge Series went head-to-head in four different disciplines to find the inaugural world champion. Drivers from 10 countries including the UK, USA, Germany, Finland and Bahrain competed in a challenging few days of karting, slalom, off-road trials and MINI racing to achieve the highest points overall.

The first MINI Challenge world champion title went to Maxime Martin from Belgium. Swedish and Austrian drivers finished in second and third places, while the winner of the Scottish MINI Challenge managed to get in the top ten taking seventh place out of 20 competitors. The top English competitor came twelfth.

Another highlight of the weekend was a special sneak preview of the new MINI Cooper S with John Cooper Works GP Kit and the chance to speak to the designers about the lighter, more powerful MINI. Only 2000 will be built and will go on sale next July.

The final race of the weekend saw ex-Formula One drivers, Touring Car champions and Monte Carlo winners line up on the grid in identical 210bhp MINI Cooper S’s with the John Cooper Works Tuning Kit. Despite the casual remarks before the race, the inherent competitive spirit of racing drivers filled the atmosphere and FIA World Touring Car Champion Alessandro Zanardi took a close finish, happy to win in his home country.