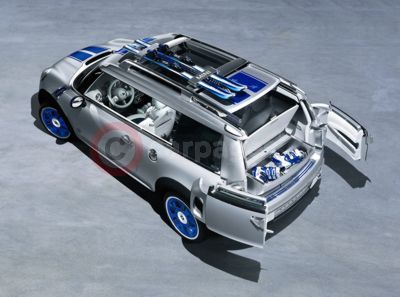 A production car based on the MINI Concept Traveller has been confirmed today as the latest model to join the MINI range. A production vehicle will be on the road within the next three years. Dr Michael Ganal, member of the Board of Management responsible for sales and marketing, made the announcement at the North American International Auto Show (NAIAS) in Detroit.

Inspired by the positive feedback for the MINI Concept Traveller at the Frankfurt and Tokyo motorshows in 2005, the new MINI will be a modern interpretation of the classic MINI Traveller and Countryman versions of the 1960s.

It will offer increased interior space and functionality, as well as all the typical MINI characteristics, especially the driving fun and opportunities for personalisation. The car will be modelled on the concept but the final design for series production is still to be defined.

Each version of the Traveller has displayed creative new technology, as well as bringing country-specific themes to appeal to the local tastes of different motorshow audiences. MINI Concept Detroit is based on a winter sports theme designed in the colours of the United States of America flag. The roof rack and boot has convenient fixings for carrying snowboards, skis and mountain bikes.

The USA has been one of the major successes for the car. The classic MINI was only on sale there for a short time in the 1960s and sold approximately 10,000 over that period. Since the new MINI went on sale in March 2002 each year has seen a year-on-year growth and 2005 set another record. 40,820 MINIs were sold in the US, an increase of 13 per cent over 2004, enabling the USA to hold its ranking as the second biggest market for the MINI after the UK. The UK sold 44,780 MINIs in 2005.