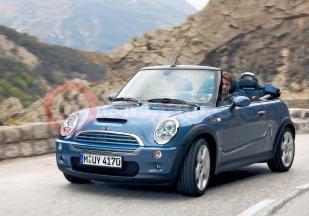 Design studies for a two-seater coupe cabriolet had been considered while the current Cabriolet was under development, he said, speaking at the press launch of the Cabriolet in Seville, Spain.

MINI’s worldwide commercial success over the last three years, had opened up "a host of exciting possibilities" for the future, said Houghton-Berry.

These could include an estate built on a stretched wheelbase.

For this year, the Cabriolet is virtually sold out, said Houghton-Berry. The Birmingham motor show had generated "an explosion of interest" and the UK’s allocation of 6,500 was accounted for with the exception of a few hundred cars when the Cabriolet goes on sale on June 26.

With Plant Oxford already working flat out on three shifts, seven days a week, a decision was imminent on whether to increase capacity beyond 180,000 a year. "As ever the paint shop is the bottleneck and Munich is studying a number of possible solutions," said Houghton-Berry.

The plant had been designed to build 125,000 MINIs a year but demand in the 73 markets where MINI is sold had far exceeded expectation.

The UK is still the number one market, with 40,500 annual sales. The USA is next with around 35,000 and Houghton-Berry said he expected the USA to overtake the UK in the next couple of years.

But there were some concerns raised by the success of MINI with demand constantly exceeding supply. "Customers will wait two to three months, but would they wait six to seven months?" he said.

Current waiting time for the Cooper derivative, which accounts for 50 per cent of sales was three to four months, while Cooper S customers have to wait five to six months.

Full year convertible sales are expected to be around 8,500 in the UK, he said.

Houghton-Berry said he was pushing for a greater degree of showroom separation in the 152 BMW dealers where MINI is sold. "It makes sense to share backroom functions and infrastructure so we won’t see any stand-alone showrooms but the dealers are doing so well that they don’t need much encouragement to move MINI out of the corner."

He said that he saw little overlap between MINI and forthcoming BMW 1 series. MINI is bringing a new, younger buyer into BMW dealers which gave the dealers more opportunities.