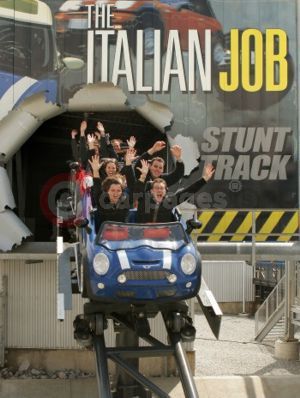 The new ‘Italian Job Stunt Track’ rollercoasters will be taking their first passengers in replica MINIs on high-speed action adventures from May this year. The rides are based on the final scenes of the 2003 ‘Italian Job’ film and feature 75 per cent scale fibreglass MINIs.

Designed to provide 1000 riders per hour with an extreme MINI adventure, Paramount’s Wonderland theme park in Toronto, Canada unveiled its new star attraction on 1st May. From 20 May the King’s Island park in Cincinnati, USA will open its own MINI rollercoaster.

Travelling at speeds of up to 40mph and with the equivalent force of 1500 horsepower, the fibreglass MINI Cooper S Convertibles will dodge police cars, avoid a helicopter, shoot down a black tunnel and complete four, 360 degree turns.

The multi-million dollar rollercoasters took six months to build and the Paramount engineers received technical advice from MINI in order to replicate the infamous tarmac-hugging grip of the UK’s best-loved small car. Each car on the rollercoaster features a special power slide effect to simulate the turns and intensify the driving experience.

‘The Italian Job’ film released in 2003 starred Charlize Theron and Mark Wahlberg and earned $100 million at the box office in the US alone. It is anticipated that over 3 million people will visit the two Paramount theme parks this year.

MINI Cooper S Convertible Images may not be UK specification cars. Colours and exterior and/or interior elements may differ from actual models.