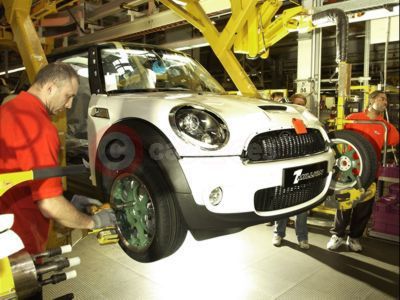 Six years after the start of series production, the one millionth MINI has rolled off the production line at Plant Oxford. This represents another milestone in the car’s history and highlights the continuing success story as rising global demand for the British-built car heads for new production and sales records.

MINI UK will see its biggest monthly sales record since the car went on sale in July 2001. Preliminary figures indicate 7,854 sales in March. The previous record month was in March 2006 with 7,687 sales. The new record signals the successful launch of the second-generation MINI Cooper and MINI Cooper S in November 2006 and orders are strong for the forthcoming MINI One and MINI Cooper D (on sale from 14 April). 2007 also sees the launch of the new MINI Clubman. This will be the third model in the increasing MINI range, joining the Hatch and Convertible.

Since its launch MINI has defined a new market segment - the premium small car with a worldwide presence and a comprehensive range of customisation options. From Chile to China, MINI is enjoying growing popularity among customers across 80 markets around the world. Almost 80% of MINIs, which are all built to individual customer orders, are currently produced for export. While initial forecasts suggested a market for 100,000 units per year, sales have totalled more than double that figure reaching a record of 200,428 units in 2005.

Developments at Plant Oxford have reflected MINI’s success. In 2001 some 2,400 associates worked in single shift operations to build up to 300 cars a day. Today more than 4,700 associates work 24/7 to produce as many as 700 MINIs per day. During the same period maximum production capacity for the plant has risen from 100,000 to over 200,000 units per year, and in the medium term, annual capacity is planned to reach 240,000 units. In total BMW Group has invested £380 million into Plant Oxford since 2000 to increase production capacity and to prepare for new MINI derivatives.

With the launch of the second generation MINI towards the end of 2006, the MINI Production Triangle was formed as the UK plants Hams Hall and Swindon became an integral part of MINI production. Hams Hall, near Birmingham, supplies petrol engines and Swindon supplies pressings and sub-assemblies to Plant Oxford. Together they bring the total number of MINI production associates in the UK up to 6,800.

Another area in which MINI has continued to develop is in the efficient use of natural resources in the car’s production. Since the first full year of production in 2002, Plant Oxford's energy consumption and CO2 emissions have both gone down by 20%, while water consumption has dropped by more than 30% per unit. In addition, more than 25 different waste materials from production are recycled.

Like all MINIs, the one millionth car was produced to customer order. In this case the ‘customer’ is BMW Group's heritage division, Mobile Tradition. The colour of the landmark MINI Cooper S is Pepper White with a specially-developed paint for the roof, Almond Green, accentuated by a ‘million’ graphic extending onto the bonnet. The interior matches the roof with leather seats, steering wheel and gearknob all in Almond Green leather.