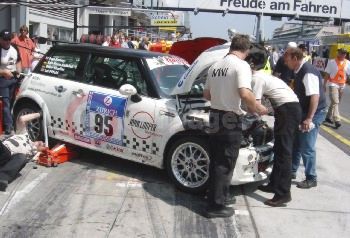 Following the team’s debut entry in last year’s Nurburgring 24 Hrs race, John Cooper Motorsport is back for more, with a two-car entry for 2004’s epic on June 12/13. Demonstrating the team’s increased ambition, they have signed the hugely experienced Touring Car and Endurance racing ace, Roberto Ravaglia to spearhead the effort.

The 47-year old Italian, now principal of the Ravaglia Motorsport ETCC team, has previously won the Spa-Francorchamps 24 hrs race, finished third at Le Mans and is a former World, European, German and Italian Touring Car Champion. Ravaglia heads up a team of six drivers, under the charge of two team managers, with Mike Cooper acting as overall team principal.

It is not just the talent that has undergone an overhaul since last year; the MINI Cooper S Works has been considerably enhanced too, with the 200bhp engine being stepped up to a far more powerful fire-breathing unit. The engine has so far stood up well to some intense testing carried out by Coopers.

As well as the main event at 3pm on Saturday, June 12, MINI will be playing a major role in the race build-up with a packed grid of red Cooper Clubsport S’s entertaining the grandstands in Round 2 of the new MINI Challenge – a joint venture between John Cooper Motorsport and MINI Germany - at midday.

Mike Cooper is thrilled with the resurgence of the John Cooper name in the motor sport arena:

‘The success of the John Cooper Challenge has really fired our ambition to put the Cooper name back where it belongs in motor sport, both domestically and internationally.’