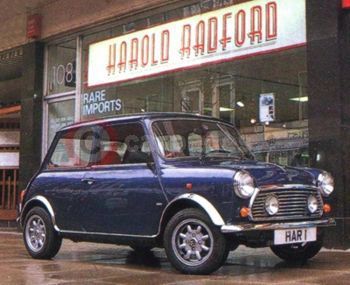 When Harold Radford died in March 1990, he left a legacy which reflects the very best of the coachbuilding art.

Originally a Rolls-Royce and Bentley dealer in West London, Harold Radford Ltd worked on Government contracts to supply modified vehicles to the military during the war years.

In 1948, Radford added a coachbuilding string to his bow, designing and manufacturing a wood-framed ‘shooting brake’ estate car conversion for the Bentley Mk VI, which he named the Countryman.

Such was the quality of the conversion that orders flowed to Radford’s newly formed company, Harold Radford (Coachbuilders) Ltd.

At their debut at the 1951 London Motor Show, Radford unveiled an evolution of the original Countryman, with an opening real tailgate conversion of contemporary Rolls-Royce and Bentley saloons. These too received critical acclaim - including the approval of Rolls-Royce.

After enjoying much success with the Countryman, the company was acquired by the owners of the Rolls-Royce and Bentley dealership, HR Owen, in 1958, and relocated to Hammersmith, West London.

In 1963, Harold Radford left the company, the same year in which the first coachbuilt Radford MINI de Ville was launched amidst the huge interest and cult following in Alec Issigonis’s creation.

This was the glory period, when the fame and celebrity status of Radford coachbuilt MINIs grew from strength to strength in the UK and throughout the world, bought by celebrities and fashionistas to leave an indelible impression on the streets.

Radford prospered through a steady progression of coachbuilt MINIs, including the de Ville GT with a full-height rear hatchback opening. Other Radford coachbuilt conversions included a shooting brake version of the Aston Martin DB5 and DB6.

And, most significant of all to motor sports enthusiasts, Radford hand-built all the road-going Ford GT40s which preceded the all-conquering Le Mans-winning race cars, and designed the distinctive colander-style racing seats.

By the early seventies, the MINI craze had peaked and, inevitably, the demand for the Radford coachbuilt MINI waned.

In 1975, the company ceased trading. It was re-launched in 1989 under the tutelage of car designer, Chris Humberstone, who initially marketed a revised version of the Radford MINI de Ville from a showroom in London’s West End.

With so much of Radford fame attached to the original MINI 40 years ago, it is fitting that the re-emergence of the name is associated with the present incarnation of the car, manufactured and marketed with such global success by BMW.