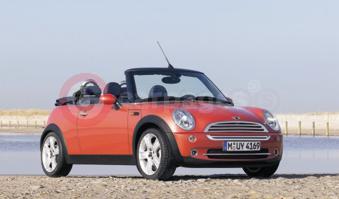 The MINI Convertible family will be completed later in the year with the introduction of the MINI Cooper S Convertible. Again, pricing and full details will be confirmed closer to launch.

Just like the rest of the MINI family, the MINI Convertible has four seats and is blessed with striking good looks, gutsy personality and go-kart style handling. With an optional equipment list longer than any other car in its class, four airbags and parking distance control fitted as standard, the MINI Convertible may appear small but it thinks big.

No fiddling on this roof

Both the MINI One Convertible and MINI Cooper Convertible have fully automatic roofs as standard. The roof operates in two stages. Press the button once and the roof slides back 40 cm creating an ‘open sunroof’. Press the button again and the roof retracts fully, neatly folding down into a compact arrangement behind the rear seats. No messy catches or tricky tonneau covers are involved – only 15 seconds and the press of a button stand between the driver and the joys of open-air motoring.

MINI Cooper Convertible Images may not be UK specification cars. Colours and exterior and/or interior elements may differ from actual models.