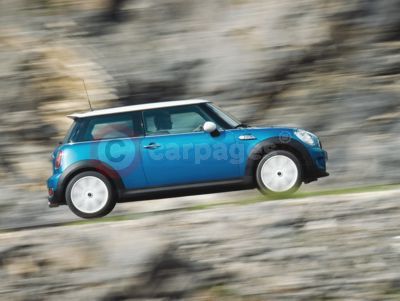 This ultra-modern four-cylinder features fully variable valve control based on the BMW Group’s unique VALVETRONIC system. This innovative valve management system adjusts intake valve lift and opening times within fractions of a second to meet the power and performance requirements of the driver. The big advantage is that it replaces the conventional throttle butterfly on ‘normal’ engines to translate any movement of the throttle pedal directly into engine speed instantly.

In addition to variable control of valve lift on the intake, valve timing is also controlled on the outlet stroke. This enhances the torque curve to deliver not only high torque at low engine speeds, but also high power at high speeds.

Displacing 1.6-litres, the four-cylinder turbocharged power unit of the MINI Cooper S now develops an impressive 175hp, up 5hp on the outgoing supercharged engine. Maximum engine power comes at 5,500rpm, with peak torque of 240Nm being maintained consistently between 1,600 and 5,000rpm. When accelerating hard, torque rises to an even higher level of 260Nm by briefly increasing charge pressure through a system named ‘overboost’.

The MINI Cooper S engine is a Direct Injection petrol power unit. Intake air is pre-compressed by a twin-scroll turbocharger complete with intercooler. Exhaust gases meanwhile are split and forced through the exhaust ducts of two cylinders each, separated from one another in the exhaust gas manifold and the turbocharger. Response time when accelerating is virtually instantaneous.

The high performance of the MINI Cooper S is also enhanced by advanced valve management – four valves per cylinder being operated by two overhead camshafts. The camshaft on the intake side comes with infinitely variable valve timing to manage both engine output and torque while minimising fuel consumption and emissions. The exhaust valves are sodium-filled in order to off-set the higher temperature loads typical of a turbocharged engine.

Innovative technologies around the engine

The Hams Hall-constructed engines featured in the new MINI boast a wide range of innovative technologies. The two-piece bedplate structure of the crankcase, for example, is sophisticated technology derived from motor sport. The cylinder block and bearing housing are made of cast aluminium alloy, while the camshafts on both engines are composite structures, not the usual castings, in order to reduce weight.

The on-demand water pump in the coolant circuit helps to reduce fuel consumption since it is only activated when the engine has reached its regular operating temperature. This helps to save fuel in the warm-up phase and the catalyst is able to reach the temperature required for optimum operation earlier.

Both the new MINI Cooper and MINI Cooper S come as standard with a six-speed manual gearbox. As an option, a six-speed automatic transmission will become available for both models. Paddles on the steering wheel allow the driver to change gear manually without removing his hands from the wheel.