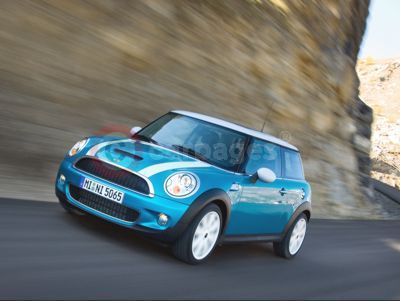 Details of the all-new MINI Cooper and MINI Cooper S revealed on the 14 August 2006. Featuring a completely new body design, a striking modern interior and modern high-performance engines, the two new models go on sale before the end of the year.

The overwhelming success of its predecessor, launched in 2001, has paved the way for the new MINI to consolidate and expand its position in the premium segment it created. In five years it has sold over 800,000 around the world, and 200,000 in the UK alone.

The external design of the new MINI has remained true to its phenomenally successful forebear, yet every body panel is different. The MINI design team rightly deemed evolution preferable to revolution and MINI’s styling remains instantly recognisable. Five years after its launch it still stands out, and this design explains why demand for the current MINI is higher today than it has ever been.

The new MINI features an all-new interior that aims to mix MINI’s unique style with improved quality and greater comfort. There is more usable space for both front and rear seat occupants and owners will be able to choose from an even wider range of colours, interior specifications and options in order to personalise their car.

The fuel consumption of both models has improved dramatically. The combined cycle for the MINI Cooper is now 48.7mpg (formerly 40.9) and MINI Cooper S 40.9mpg (formerly 32.8). CO2 emissions have also been reduced meaning that both models will move two places in the VED car tax ratings.

The new MINI One will follow in the first half of 2007, its 1.4-litre engine developing maximum output of 95hp. The MINI range will be joined at the same time by the new MINI Diesel featuring the most advanced and sophisticated turbodiesel technology in its class. Further details of these key MINI derivatives will be issued at a later date.

The new MINI will be built at Plant Oxford, which is currently gearing up to increase its capacity to 240,000 by 2008, more than double the planned production capacity prior to the first car coming off the line in spring 2001. The new BMW-designed engines will be assembled at Hams Hall in the Midlands and the body panels and sub-assemblies will come from Plant Swindon. This ‘MINI production triangle’ in the UK is one of the true automotive UK success stories of recent years.