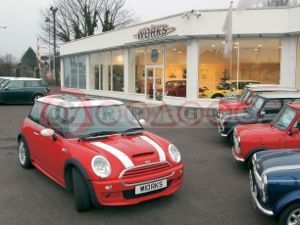 Ultimate MINI approved 200bhp MINI Cooper S ‘Works’ soon to hit the road John Cooper Works, the original British company behind the legendary MINI Cooper has developed two new aftermarket and retrofit tuning kits, for the new MINI. The MINI Cooper ‘Works’ and MINI Cooper S ‘Works’ will make their world premiere at the Geneva Motor Show on 4 March 2003. The kits will be available from both the John Cooper Works organisation and all official MINI Dealers from April 2003. Uniquely, having obtained full approval and endorsement from the BMW Group, vehicle warranty and MINI tlc* remain unaffected providing the kit is fitted by an official MINI dealer or by John Cooper Works. Prices of the ‘Works’ kits will be announced closer to launch. A brief History

The Cooper name has been inextricably linked with MINI since the MINI Cooper was launched in 1961. The Cooper name originates from John Cooper, an engineering legend in British motor sports history. With the introduction of new MINI in 2001, the Cooper name was given a fresh lease of life, and though John Cooper sadly died in December 2000, through his son Mike, a new generation of MINI tuning kits have been developed at the original John Cooper premises in East Preston, West Sussex.

Including features such as a modified cylinder head with higher compression, modified engine electronics, a special air filter and rear silencer the MINI Cooper ‘Works’ generates a maximum output of 126bhp at 5,750rpm. This is an increase of 11bhp over the standard car. Maximum torque is increased to 155Nm from149Nm and is available at 4,700rpm. This power hike gives the

Specially designed sports seats and a ‘Works’ 18-inch alloy wheel are available for John Cooper Works cars although can be retrofitted to all MINIs. The 18-inch wheel is a star design featuring five widening spokes giving the car a sporty and powerful look. It fits tyre sizes 250/40 R18 with runflat system.

The sports seats have been designed to offer superb grip. With a reinforced shoulder area and adjustable thigh support for added comfort, they can also be ordered with seat heating (provided the car being converted was purchased with this option). The ‘Works’ sports seats are available in the same range of colours as the standard range of MINI seats. Both the sports seats and the 18-inch wheel will be available from all official MINI dealers from April 2003. Prices will be announced closer to launch.

The history of John Cooper’s company began at the end of the 1940s when motorsport pioneer John Cooper and his father Charles founded the Cooper Car Company and began producing small, competitive racing cars. The Cooper 500 set the tone and made possible a new world of affordable motor racing. Early customers of John Cooper included no less than Stirling Moss and five times world champion Juan Manuel Fangio, who sat behind the wheel of the first Formula 2 racing car by Cooper.

At the end of the 1950s the first Cooper rear-engined Formula 1 car challenged the big guns such as Ferrari, Maserati and BRM who still raced with front mounted engines. In 1958 Stirling Moss drove the Cooper Climax T43 to victory, making it the first rear-engined racing car to win a world championship race – just like all the F1 cars today. In 1959 Jack Brabham won the first of two Formula 1 constructor’s and driver’s world championships for Cooper in a Cooper Climax.

However, John Cooper was not only active in Formula racing. In the 1960s he achieved success with the MINI Cooper on the racetrack and in rallies as well. The MINI Cooper famously won the Monte Carlo Rally three times between 1964 and 1967, and only hotly disputed disqualification over a technicality in 1966 prevented complete domination.

Despite the MINI Cooper’s success and popularity, production was stopped by BMC in 1971 after 150,000 units had been produced. John Cooper however kept the MINI Cooper brand name alive. In order to meet the growing demand for Cooper cars he produced tuning kits and accessories in the 1980s to convert MINIs into MINI Coopers.

In 1990 the MINI Cooper was brought back to life and John Cooper continued to produce numerous special models of the sporty Cooper S.

At his garages in East Preston, West Sussex the John Cooper Works business continues to manufacture engine and chassis tuning kits for the classic MINI. The sharp engines and the legendary handling of his tuned MINIs hugely influenced the sporty image of the MINI Cooper to this day.