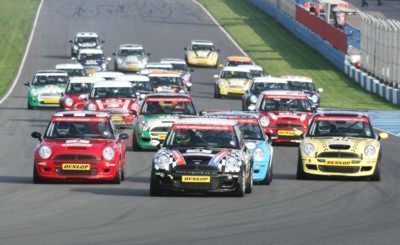 On 28-30 October, Misano Circuit (near San Marino), in Italy will play host to the first-ever International MINI Challenge, pitting the best MINI racers from across the world head-to-head in a multi-discipline contest. The four leading competitors from this season’s twelve-round John Cooper Challenge will be amongst the starting grid of twenty.

Now in its fourth season, the success of the John Cooper Challenge - developed in 2002 by Mike Cooper as a tribute to his late father, John’s longstanding association with MINI and motorsport – has spawned many one-make MINI racing series, both official and unofficial, across the globe.

The four top British MINI racers will face opposition from as far afield as Australia, New Zealand and Bahrain as well as Belgium, Germany, Switzerland and Scandinavia.

The International MINI Challenge will consist of four driving disciplines: a circuit race, slalom, go-kart race and quad bike trial. The circuit race, which will account for more than 50 per cent of the points on offer, will be contested in twenty of the race-prepared 210bhp Works MINI Cooper S currently competing in Germany’s MINI Challenge, for which all running costs will be covered by MINI.

The John Cooper Challenge points table after the final two rounds at Silverstone on October 8 and 9 will determine which four of its twenty eight competitors have earned the right to represent the UK on the inaugural international MINI stage; two places will be awarded to the first and second placed finishers in both the Works MINI Cooper S and the Works MINI Cooper Championships.

The announcement has caused massive excitement within the John Cooper Challenge paddock, not least from 2004 runner-up, Arthur Forster:

‘It’s a brilliant idea and has created a great buzz around the paddock. Having been part of the John Cooper Challenge since it started in 2002, it’s great to see how MINI racing is now taking off around the world. I will certainly be doing my utmost to be part of it and hopefully bring the first ever title back to the UK!’

Mike Cooper is thrilled at the prospect

‘It has already been a great year for the Challenge, moving up a gear to run alongside the British GT and F3 race package. Now to have the added incentive of the International MINI Challenge for our competitors is the icing on the cake.’