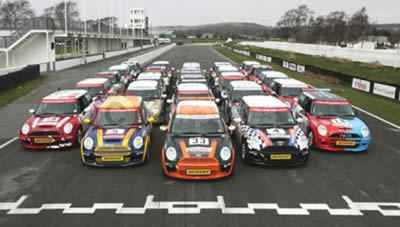 The John Cooper Challenge - the popular one-make MINI race series - has celebrated its selection as primary support race to the prestigious British GT and British F3 race card by securing an unprecedented number of return competitors, a packed grid and extensive TV exposure for 2005.

The 2005 season will be the Challenge’s fourth and looks set to be the most exciting yet. Twelve races are spread across six double-header weekends at selected rounds and venues from the GT/F3 calendar, including Donington, Castle Combe, Mondello Park and Silverstone.

No fewer than 15 of last year’s competitors are amongst the 26 lined up to start the 2005 Challenge at Donington on April 2, demonstrating the pulling power of the MINI, the professionalism of the championship’s organisation and the outstanding media exposure that the championship enjoys.

All twelve rounds of the Challenge will be filmed for broadcast as a stand-alone 30-minute show across Sky Sports channels.

Once again, the John Cooper Challenge has attracted a wide range of competitors, from all walks of life, including a pair of high-flying City spouses - Andrew and Sue Cox (39 & 38, Battersea) - who are taking the ‘work hard, play hard’ ethos to the limit, both lining up on the Challenge grid in mirror-image Works MINI Coopers.

Also keeping it in the family will be father and son, Jonathan and David Shepherd (48 & 20, Sandbach, Cheshire). Jonathan will be entering his third season in the John Cooper Challenge and relying upon experience to keep him ahead of David’s youthful charge.

Joining them will be Freddy Nordström (Weybridge), a graduate of two years in T-cars, who turned sixteen on the 22nd of February, qualifying him to race but still needing Mum to take him to and from the circuit.

Amongst those returning for a third year is Mark Speller, John Cooper Challenge Champion in 2003. He comments:

‘The Challenge continues to go from strength to strength. The fact that we’ll now be running alongside the prestigious GT and F3 programme is testament to the professionalism of the series in its first three years.’

John Cooper Works Managing Director, Mike Cooper, who created the Challenge in 2002 as a tribute to his late father’s longstanding association with MINI and motorsport, is thrilled with the series’ elevation in status:

‘It’s fantastic news that for the fourth year in a row we’ve got such a full grid weeks in advance of the season start. We’re all hugely excited about this season’s changes and can’t wait to get started.’