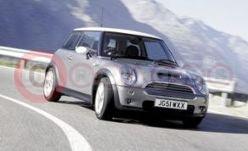 MINI Cooper S - the most powerful and luxurious MINI - goes on sale in June at a jaw-dropping price of just £14,500 on the road.

With 163 bhp, Sports Suspension PLUS and a brand new six-speed gearbox, MINI Cooper S aims to do what MINI One and MINI Cooper have already achieved and set a new benchmark amongst its rivals.

The 'heart' of the MINI Cooper S is the same compact, transverse, 4-cylinder engine from MINI One and MINI Cooper, but uses state-of-the-art supercharger and intercooler technology to extract 163 bhp at 6,000 rpm. MINI Cooper S will be the only car in its class breaking the magical 100 bhp per litre mark from its 1.6 litre engine.

Complementing the uprated engine is a new six-speed version of MINI's highly-praised short-shifting manual gearbox. When combined with the finely-tuned Sports Suspension PLUS and MINI's renowned chassis and handling, MINI Cooper S drivers are guaranteed a real treat.

ABS, CBC (cornering brake control) and EBD (electronic brakeforce distribution) and ASC + T (automatic stability control + traction) are all fitted as standard to ensure that drivers can take the Cooper S to its limits with supreme confidence. Behind the scenes, active and passive safety features include up to six airbags (four as standard) and run-flat tyres, ensuring the car is also top of its class for safety.

MINI Cooper S will be instantly recognisable as the top-of-the-range model. An eye-catching air intake scoop on the re-designed bonnet, chunky bumpers, centrally-mounted twin tailpipes and black side sills and a host of other details distinguish it from the MINI Cooper.

As with MINI One and MINI Cooper, the Cooper S comes with a three year, unlimited mileage warranty and customers will be offered the ground-breaking MINI tlc package that provides five years of servicing for just £100. MINI tlc covers standard servicing parts and labour. Insurance ratings are also expected to be very competitive.

Trevor Houghton-Berry, MINI's General Manager in the UK said: "MINI Cooper S is the icing on the cake for everyone working on MINI. The car has a great pedigree, great looks, stacks of power and top-of-the-range refinement. Add this to the superb chassis and handling already experienced on MINI One and MINI Cooper and you have the ingredients of a truly 'Super' car in the Supermini segment. It's a great second stage in MINI's bright future."

MINI Cooper S will appear on the market thirty-nine years after the original 'S' was introduced. Owned by celebrities such as John Lennon and Steve McQueen, the 'S' established the Cooper legend and dominated the Monte Carlo rally in the mid-sixties, winning in '64, '65 and '67 and, controversially, in '66 when it was subsequently disqualified.

Already 1,700 customers have placed advance orders for the Cooper S which goes on sale in June. Customers wishing to order a MINI Cooper S are invited to visit their local MINI Dealership.

This is a 20-year+ news article, from our MINI archive, which dates back to the year 2000.

If in doubt check with your local MINI dealer as car prices and technical data will have changed since 2002.