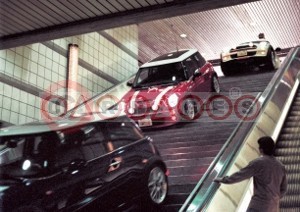 MINI will be bursting onto the big screen this year by starring in a new film called ‘The Italian Job’. Though not a remake of the classic original, the new movie draws its inspiration from its legendary namesake, with new MINI likely to steal the show just as it did back in 1968 in a series of action packed car chase scenes and jaw dropping stunts.

Supporting MINI in the film are Mark Wahlberg, Edward Norton, Charlize Theron, Jason Statham, Seth Green, Moss Def and Donald Sutherland. Before the cast were allowed to get their hands on MINI, the film’s director F. Gary Gray insisted on sending his actors to a driving school so they could better understand how to work with new MINI.

True to the Italian-based original, the opening scenes of the film are shot in Venice and the Italian Alps but then the film moves swiftly to LA where MINI brought the city to a standstill – two blocks of Hollywood Boulevard were closed down in order to allow filming of what promises to be the most exhilarating and exciting car chase of the year. "We literally controlled those streets for a week, and that’s a big deal," said producer Donald De Line. "We had 300 cars and several armoured trucks on the ground, helicopters flying low overhead, and motorcycles and MINIs driving over the stars on the Hollywood Walk of Fame Sidewalk."

MINIs are used as getaway cars in LA to carry stolen bars of gold. Weaving in and out of traffic, performing spectacular jumps and even driving down the Hollywood Boulevard subway entrance, the MINIs survive a series of narrow escapes and prove themselves to be the real heroes of the film.

Trevor Houghton-Berry, general manager MINI UK said: "Making a new film called ‘The Italian Job’ is bound to draw comparisons with the classic film. The new ‘Italian Job’ is definitely inspired by the original, but in no way seeks to compete with a movie that is undoubtedly one of the great icons of British cinema. However one thing both films do have in common is a love of the MINI and what a MINI can do, both on and off the road. The car chase scenes are fantastic and it’s worth going to see the film just for the MINIs alone."

‘The Italian Job’ will be released in the USA at the end of May and will arrive in the UK in September.