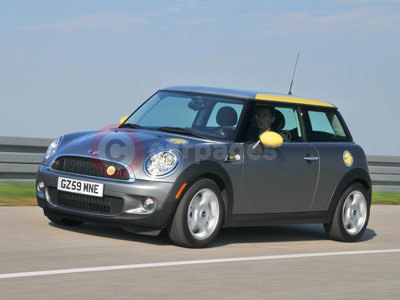 The MINI E UK Field Trial which has been researching and analysing the use of fully electric MINIs on UK roads since December 2009 has come to an end today. The 40 'pioneers', who are the second set of participants in the trial handed back their MINI Es at an event at MINI Plant Oxford.

These 40 'pioneers' are part of MINI E UK Research Consortium, one of eight UK projects supported by the Technology Strategy Board and Department for Transport's £25m Ultra Low Carbon Vehicles Demonstrator Programme aimed at accelerating the introduction of viable electric passenger vehicles to the UK.

During the UK trial the MINI E was tested on British roads by a mixture of 80 private, corporate and public sector drivers - all of whom gave valuable feedback to the project consortium and UK Government. Between them they covered over a quarter of a million miles throughout the duration of the trial. These findings will ultimately be used in the engineering and infrastructure support of mass-produced electric vehicles and establish the social and economic issues and aspects of running an electric car.

The 40 MINI Es will remain in the UK and will be used in a small number of commercial partnerships, they will also be used at consumer and corporate events as well as in partnerships with government and industry stakeholders.

The final results of the MINI E UK study will be released this summer, however results from the first three months of the trial (December 2009 - February 2010) have already been analysed and the key findings are as follows:

The MINI E UK Research Consortium, of which BMW Group is the lead partner, comprises several organisations which are based around Oxford and the South-East of England. All are playing important roles in the collaborative field trial. In addition to the BMW Group, the consortium includes Southern Electric (part of the Scottish and Southern Electric Energy Group) which will supply both the electricity and the electrical infrastructure, an academic partner (Oxford Brookes University's Sustainable Vehicle Engineering Centre) and the South East England Development Agency (SEEDA) as well as Oxford City Council and Oxfordshire County Council.

During everyday usage, the MINI E can travel around 100-120 miles (up to 156 miles in ideal conditions) on a single charge, depending on driving style and conditions, and of course, has the all the characteristic performance for which the MINI is famous. It can sprint from 0-62mph in just 8.5 seconds and has an electronically-limited top speed of 95mph.