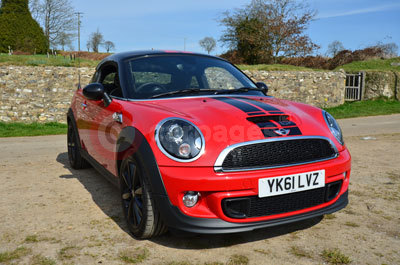 The MINI brand under the wings of BMW has been with us in the UK since July 2001. We have seen the MINI Hatch develop over the last eleven years to include the Convertible, the Clubman, the Countryman and now the Coupe with the Roadster completing the line-up.

The Coupe is MINI’s first two-seater car and went on sale on the 1st October 2011 and was launched with a four engine line-up - three petrol and one diesel.

According to MINI the Coupe’s mission is a simple one; “to maximise the thrill of being behind the wheel”.

The MINI Coupe is currently available with four engine variants, three petrol and one diesel (they are all four cylinder). The output range for the 1598cc petrol engines starts with a 122 hp unit, 184 hp (Cooper S), 211 hp (John Cooper Works) and to complete the line-up there is a 1995 cc 143 hp diesel engine.

As standard there is a short-shift six-speed manual gearbox which comes with a self- adjusting clutch on all but the base model. A six-speed Steptronic automatic gearbox is available with shift paddles for all but the John Cooper Works version.  Our test car was fitted with a manual box and we found the gearbox a joy to use.

We tested the SD Coupe with the 1995 cc twin scroll turbo-charged 143 hp/305Nm diesel engine which will propel the SD from 0-62 mph in 7.9 seconds and on to a top speed of 134 mph. On the road the SD Coupe is very willing and is only 1 second slower than the John Cooper Works version to 62 mph but with the economy of a diesel. If you keep the revs up above around 1,800rpm then the SD has some grunt and you can have great fun on your favourite ‘B’ roads, we thought the diesel would be disappointing but we were wrong.

MINI quote an official combined fuel consumption figure of 65.7mpg, which as with all official fuel figures is ambitious, we achieved around 44mpg on average which is not too bad when you consider the car was not run in and our enthusiastic driving style. The SD Coupe comes with MINIMALISM technology as standard which adds brake energy regeneration, a shift point display that tells you the optimum time to change gear and an automatic stop/start system which is designed to save fuel in stop/start traffic.

The CO2 emissions figure has been recorded at 114 g/km, which is very good considering the overall performance figures and is appealing for company car drivers with a BIK (benefit in kind) value of 13% and zero first year road tax.

Overall we thought the MINI SD Coupe was engaging to drive, the engine offers lots of flexibility with a good return at the pumps.

This is a 10-year+ news article, from our MINI archive, which dates back to the year 2000.

If in doubt check with your local MINI dealer as car prices and technical data will have changed since 2012.

MINI Coupe Images may not be UK specification cars. Colours and exterior and/or interior elements may differ from actual models.