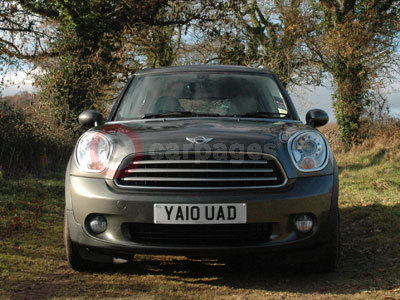 Introduced to the UK on the 18th September 2010 the MINI Countryman is the fourth model in the MINI family and the first MINI to offer the option of four wheel drive.

Although the MINI Countryman adheres to the MINI styling rules, it is not particularly 'mini' in size anymore, in fact it is quite large and when sat next to the previous week's test vehicle, a BMW X5, it looks surprisingly big. It is 398 mm longer than a MINI Hatchback (at 4097mm), 316 mm wider (at 1,789 mm) and 170 mm higher (at 1577mm).

There is a choice of three petrol engines MINI One, Cooper and Cooper S and two diesel models - MINI One D and Cooper D. The petrol engines are the new 1.6 litre four cylinder power plants which are already found in the Hatchback, Convertible and Clubman models from spring 2010.

The diesel model we tested the Cooper D features an all-new BMW 1.6 litre four cylinder, the N47 turbocharged unit. This produces 112 bhp which is enough to propel the MINI Countryman Cooper D ALL4 from 0 - 62 mph in 10.9 seconds and on to a top speed of 115 mph.

Whilst this might not sound that quick on paper, on the road it never seems lacking and feels a lot quicker than the figures indicate. Even cruising on the motorway in sixth gear, there is still plenty of punch to overtake comfortably.

We were very impressed by the 1.6 diesel engine and from the inside there is little indication that this is a diesel unit, with passengers commenting that they could not believe it was diesel.

The Countryman benefits from a number of fuel efficient and co2 reducing measures including Brake Energy Regeneration, Auto Start Stop, a gearshift point indicator, and on-demand management of the engine's ancillary units.

If in doubt check with your local MINI dealer as car prices and technical data will have changed since 2010.

MINI Countryman Images may not be UK specification cars. Colours and exterior and/or interior elements may differ from actual models.