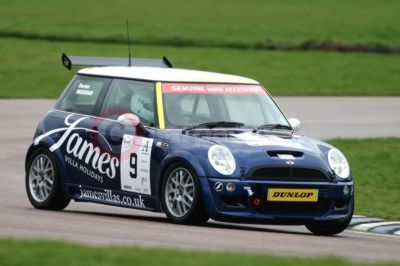 A non-championship round of the 2005 John Cooper Challenge, the Darren Needham Memorial Race has been added to the calendar to commemorate 2004 JCC competitor Darren Needham, who lost his life in a racing accident at Silverstone last year.

The Darren Needham Memorial Race is set to become a yearly event for John Cooper Challenge competitors past and present. The weekend will be a celebration of Darren's life and love of motor racing and is being fully supported by his family and their business, James Villas Holidays. The winner of the 133 bhp Works MINI Cooper and 210 bhp Works MINI Cooper S categories will each win a one week villa holiday for two people. Darren's father, James is looking forward to once again meeting his former co-competitors and friends from the 2003 and 2004 series.

"It will be nice to reacquaint myself with all the guys and girls I raced with in 2003 & 2004. I feel sure that Darren would have been flattered that such an event was organised in his memory and would wish his old comrades all the best for the race.

It is nice to see that the friendly spirit of the Challenge is still so strong and I am looking forward to watching a close race."

All the former JCC champions have decided to participate and spectators at the Kent circuit will see which one of them is the "Champion of Champions" in the world of MINI racing.

John Cooper Works Managing Director, Mike Cooper, who created the Challenge in 2002 as a tribute to his late father's longstanding association with MINI and motorsport, is thrilled with how many previous competitors are returning for the memorial race:

"It will be great to see so many familiar faces in the paddock for the race and maybe it will settle who is the best champion so far in the 4 year history of the John Cooper Challenge.

The main emphasis of the event is to have fun without worrying about points and places, but I am sure with the calibre of racers we have competing will produce some excellent door to door racing that the Challenge is famous for."

The John Cooper Challenge is the UK's only official MINI racing series. Since its inception in 2002, the twelve-race championship has provided its competitors with bumper-to-bumper racing action, packed grids and lots of fun.