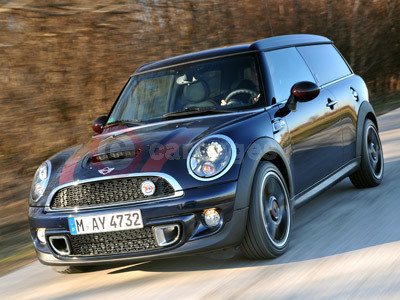 Just a few months after the market launch of the new MINI family and the MINI Countryman, the start of 2011 has brought another wave of driving fun and individuality in the premium brand's hallmark style. The MINI Cooper SD, due for launch in spring 2011, will be the most powerful diesel variant yet in the MINI line-up. The new 2.0-litre engine developing 105 kW/143 hp - available for the MINI, MINI Clubman, MINI Convertible and MINI Countryman - will drum up even more power yet burn extremely small amounts of fuel.

The new MINI Cooper SD slots into the range above the MINI One D with 66 kW/90 hp and MINI Cooper D developing 82 kW/112 hp as the most powerful diesel MINI. Its 2.0-litre four-cylinder turbodiesel unit produces maximum output of 105 kW/143 hp at 4,000 rpm. A stand-out characteristic of the new diesel is its mighty pulling power, which remains on tap even under heavy loads; maximum torque of 305 Newton metres (225 lb-ft) is available between 1,750 and 2,700 rpm. Add this to the excellent balance between output and fuel consumption familiar from the other models in the MINI family plus extraordinary power development for a four-cylinder engine, and the MINI Cooper SD has all the tools the sporty driver could ever need.

The new MINI Cooper SD is fitted as standard with an extensive range of MINIMALISM technology. In addition to the engine's efficiency, features such as Brake Energy Regeneration, the Auto Start/Stop function, Shift Point Display, Electric Power Steering and the need-based operation of ancillary components help to produce outstanding fuel economy for this output class.

The models fitted with the new diesel powerplant come as standard with a six-speed manual gearbox, whose ratios are tuned carefully to the engine's performance characteristics to enable powerful and silky smooth acceleration. A ready-to-drive weight of 98.7 lb makes this the lightest gearbox of its kind. Added to which, it sets a new benchmark in the MINI segment with its short shift travel and impressively precise action. A six-speed automatic gearbox will also be available from launch as an option. Its exceptionally short shift times and direct "target gear" finding capability on downshifts also allow the automatic to enhance the sporting character of the MINI Cooper SD.