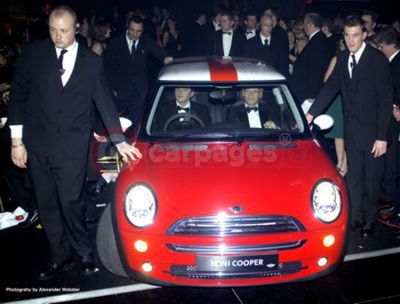 On Monday 22 November, MINI’s rock-solid desirability increased seven-fold. At a London charity event commemorating England’s Rugby World Cup victory a red MINI Cooper was auctioned for a staggering £90,000, over seven times its list price. The event to celebrate the anniversary was attended by the England rugby squad and over 20 players signed the St George’s flag roof, contributing in a small way to the increased valuation!

The evening was organised by ex-England players Kyran Bracken and Paul Grayson to raise funds for their chosen charities and testimonial season.

MINI dealership Specialist Cars Ltd in Stevenage provided the MINI. Dealer Principal, Clive Fletcher, said: "We have had a relationship with Kyran’s club, Saracens, for over 10 years and were pleased to be able to help with his fund-raising. Equally, it was great to have a MINI celebration of England’s superb performance in winning the World Cup."

The new owner of the autographed MINI Cooper is a supporter of the Northampton Saints rugby team where Paul Grayson has recently taken on a new role as coach after playing for the club for many years.

The auction raised over £200,000 and the MINI was the highest bid of the evening. With all the autographs protected from the elements (and the odd carwash) by a clear lacquer, its residual value is expected to remain intact.

Two charities that will benefit from the evening are the Wooden Spoon Society, rugby’s own charity that supports disadvantaged children and the Saints Benevolent Fund.