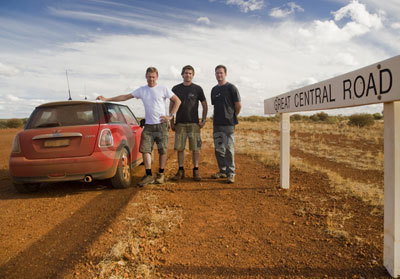 In 1966 rally driver, motoring journalist and novelist Evan Green wrote a book entitled 'Journeys with Gelignite Jack', a fascinating account of his groundbreaking journey through Australia in a classic MINI. Now in 2009, journalist Gavin Green has retraced his father's tyre tracks in a new MINI Cooper, encountering some of the world's most hostile driving terrain and recreating perhaps the greatest MINI adventure of the last fifty years.

Evan Green was the first man in history to drive across Australia from east to west through its centre. Not content with that journey, he then proceeded to do a north-south crossing straight after.

Vehicle lubricants manufacturer Castrol approached Evan in 1965 with the idea for the unique trip, which it would then use to raise awareness of its new Castrol GTX product. Evan was inspired and his remarkable 'figure of eight' route eventually totalled 12,000 miles, equivalent to half way around the world. Supporting the MINI was an Austin 1800 and, on the roughest Western Australian sections, a Land Rover.

Gavin Green's east-west journey in April 2009, commissioned by British Airways inflight magazine High LIfe to celebrate the MINI's 50th anniversary, followed 80 per cent of the same roads and tracks used by his father, driving from Sydney to Perth via Alice Springs. The gruelling drive was undertaken in a virtually unmodified new MINI Cooper. Initial concerns surrounding the suitability of the MINI Cooper's standard tyre and suspension configuration were confronted head-on by a trio consisting of Gavin, BMW Group Australia Senior Technician Darryl Cook and photographer Mark Bramley. With only a bespoke sump guard fitted as a safety addition to the car and their remaining nerves cast aside, the team embarked on the journey of a lifetime.

Covering 4,130 miles in 10 days, Gavin passed through Bourke, Barcaldine, Boulia, Alice Springs and Laverton, before arriving in Perth. Despite the ongoing incredulity of locals at various points along the way, Gavin and his crew continued unperturbed and their MINI Cooper unfailingly stood up to the harsh conditions thrown at it when driving through the Simpson, Great Sandy and Great Victoria deserts.

Gavin said: "I wanted to give a different perspective on MINI in its 50th anniversary year and my father's journey in 1966 has long been something I've wanted to pay homage to. It was an emotional experience because crossing Australia in this way meant we had the opportunity to witness some awe-inspiring locations and people, all of which is captured in the stunning collection of images we now have from the journey."

"I cannot fault the MINI Cooper in any way. It continually impressed me and that is testament to its build quality. The MINI was running on standard 16-inch run-flat tyres and we didn't once have to change them, despite it often having to cover a mix of rock, mud, sand and asphalt at high speed." exclaimed Gavin.

The full story of Gavin's trip will be read first by flyers travelling with British Airways when it is published as the cover story on 1st July 2009 in BA 'High Life' magazine.

British buyers seeking to start their own MINI adventures can do so by visiting any UK MINI dealer and taking a closer look at the 1.6-litre, 120 hp MINI Cooper, available now priced from £13,715 OTR.

This is a 13-year+ news article, from our MINI archive, which dates back to the year 2000.

If in doubt check with your local MINI dealer as car prices and technical data will have changed since 2009.