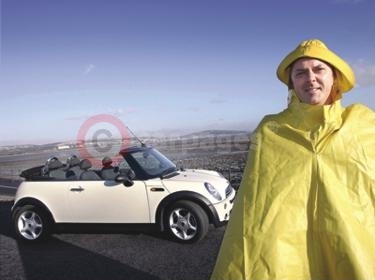 MINI Convertible tops the UK charts as the best-selling convertible of 2005, as a record 200,000 MINIs leave Oxford.

Despite the UK’s consistently changeable climate, MINI drivers are refusing to allow their soggy surrounds to put a dampener on their enthusiasm for open top motoring. In 2005 the MINI Convertible outsold its nearest competitor by a whopping 27 per cent. The MINI One, Cooper and Cooper S Convertibles now account for almost one in every four MINIs sold.

Simon Foley of Swansea - the UK’s wettest city* - is amongst the 9,849 drivers to get their hands on a brand new MINI Convertible in 2005. The 38-year-old senior electronics engineer swapped his MINI One for a MINI Cooper Convertible in September and is happy to let the Welsh rain fall on him in anticipation of brighter horizons.

He said, “I was already a happy MINI owner but the opportunity to enjoy my driving adventures al fresco was just too good to miss.

“These days there’s absolutely no drawback to owning a convertible. In fact, throughout the winter it’s just like owning a hatch and, when the sun finally appears, you’ve got the option of dropping the roof and properly taking in your surrounds!”

Andy Hearn, General Manager for MINI UK, said: “It’s ironic that Britons buy three times as many convertible cars as our French and Italian neighbours**, considering their extra rays of sunshine. But it’s great news that Britons have taken the MINI Convertible to heart and made it the favourite of 2005.

“The MINI Convertible shares the same winning characteristics as the hatch. Fantastic handling, stunning design, value for money and a roof that drops automatically in less than 15 seconds; not many Convertibles can follow that!”

On Saturday 17 December, Plant Oxford built its 200,000th MINI this year. A Pepper White MINI Cooper S Convertible will be going to a customer in Australia. This is the first time since 1988 that the Oxford Plant has produced 200,000 cars in one year and is double the initial company forecast of 100,000 MINIs a year. 766,290 MINIs have rolled off the production line since the start of production in April 2001 and been delivered to owners in over 70 different countries.