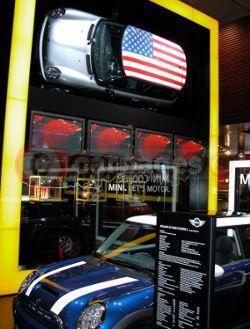 THE new MINI has conquered America becoming the first British car to be voted the USA's Car of the Year after only eight months on sale there.

The little newcomer, although now owned by German carmaker BMW, is built at the former Rover plant in Cowley, Oxford.

And rave reviews at home have been followed in the USA where sales have exceeded all expectation. BMW had planned to sell 20,000 there in 2002 but the orders were soon rolling in after the new MINI's launch last month.

The end of year total reached 24,590 and the order books are bulging again for this year.

The Car of the Year Award, which has previously been won by American or Japanese cars, was made by 50 full-time automotive journalists from Canada and the United States.

It was handed to Jack Pitney, general manager of MINI USA at this week's Detroit Motor Show.

The MINI Cooper and Cooper S models sold across the Atlantic have already won four-star approval from the American highways authority in crash tests.

The Car of the Year Award recognises the most outstanding vehicle based on innovation, design, safety, handling, driver satisfaction and value for money.

The new MINI beat off a challenge from Nissan which had its Inifiniti G35 and 350Z sports car - both built in North America - shortlisted.