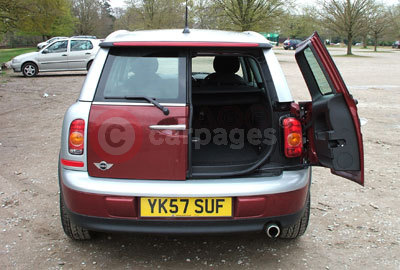 Apart from the inevitable differences in torque and cleanliness, on the whole, the Cooper is just about evenly placed between the other two. Its engine produces 120hp at a lofty 6,000rpm and 160Nm at 4,250rpm and will propel the car from 0-62mph in 9.8 seconds before reaching a top speed of 125mph (where legal).

Unfortunately, if you factor in hills and more than one body on board, these performance figures become disappointingly redundant and the need to keep swapping between the lower of the six gears, increases. And that does nothing for the fuel economy. On the face of it, the official figures are very good at 39.8mpg (U), 62.8mpg (E-U); the combined is 57.4mpg and the CO2 emissions are measured at 132g/km putting the Cooper in VED Band C. These figures are for the manual car and not those with the optional 6-speed automatic with tiptronic and steering wheel-mounted paddles.

The MINI Cooper may not be as athletic as it might, but the handling is very good. Its wide, squat stance ensures stability and ability to cope with swift changes of direction. The suspension is sporty-firm and the steering, precise but I would recommend that anyone buying the Cooper or Cooper D, who enjoys vigorous driving, invest £215 in the optional Sports seats, for extra lateral support.

Along with ABS with EBD, the Clubman comes with Cornering Brake Control (CBC), Dynamic Stability Control (DSC) combined with ASC+T, which is a traction control system, and Hill Assist on all manual versions.

There are six airbags as standard; front and side for the front occupants and curtain airbags that extend to protect the rear passengers. Based on the MINI hatch results, the Clubman is expected to achieve a maximum, 5-star rating in the Euro NCAP safety tests.

The Clubman is more about functionality than practicality with a list of standard features that includes an engine start/stop button, where the key-fob fits in a slot; there is a tyre pressure warning system, and for manual versions, an automatic engine cut-out, which shuts the engine off whenever the car is stationary and starts it up again when the clutch is depressed.

I was one of those that sang the praises of the new MINI hatch. It was, and still is, very different to anything else on the road and it had a lot to live up to, if it was to be worthy of the name. However, the MINI Cabriolet has its faults and the Clubman is simply not well thought out. For sure, the extra space is a bonus but its use is limited. That said, I’m certain that die-hard MINI fans will overlook its shortcomings.