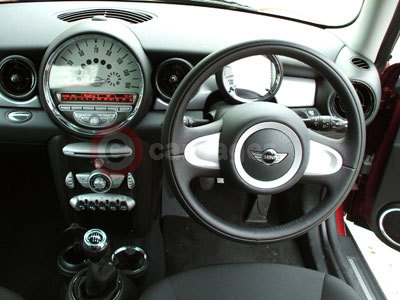 This I know for sure as the Granny I used as a guinea-pig, who is not that old and infirm, ended up sitting in the rear footwell with arms and legs flailing inelegantly - bless her! Of course younger people and children might not have such a problem but the Clubdoor is still on the wrong side for us. That said, the fuel filler cap on the other side prohibits a swap.

The MINI Clubman is the same as the Hatch from the bonnet to the B-pillar. The leading edge of the roof, therefore, is still a good way forward and quite low, so the driver feels as if he or she is driving a pillar-box: even when the seat height-adjustment is at its lowest point. However, the £680, panoramic sunroof should alleviate the effect, somewhat.

One of the interior features that made the new MINI so different was the toggle switchgear. Understandably, these flip-switches have been retained in the second generation Hatch and therefore the Clubman, continuing the ‘cockpit’ ambience. The main row, comprising switches for the windows, central locking and front fog lights (where fitted), sits below the very large, centrally positioned, speedo, which dominates the cabin and causes distracting reflections. If the Interior Light Pack is ordered another row of toggle switches are fitted to the roof panel above the rear-view mirror.

The oversized speedo also contains an unusual fuel gauge, seatbelt warning light and the audio functions for the single CD/radio unit. Satellite Navigation and other audio systems are available.

Atop the rake- and reach-adjustable steering column the circular theme continues in the form of a clock-like rev-counter, into which is set a small information screen covering range, average fuel consumption and in cars with 6-speed manual transmission, it also suggest the best time to change up or down a gear.

Outside, the Clubman is the same width as the Hatch but has a different roof, which adds 2cm to the height. This so-called ‘Dune Line’ has slightly raised edges, which run the full length of the car. The idea is that it balances the proportions and makes the car look smaller. The roof can be ordered in silver or black, as can the C-pillars and rear bumper panels. Body- colour is also an option for the roof but not the rear panels, but tends to make the car look boxy.

Of the three Clubman versions, the MINI Cooper and Cooper D look the same from the back. The Cooper S, on the other hand, has honeycomb panels set into the rear bumper, just over the two tailpipes. At the front, both the Cooper and The Cooper D have chromed radiator grilles while the Cooper S has a black honeycomb grille.

Further minor differences are in the bonnet area; the Cooper D has a slightly higher bonnet than the Cooper and a larger lower air intake with a body-coloured crossbar. The Cooper S has an even higher bonnet with an air scoop, it is also more defined. Like the Cooper D, it needs the extra 2cm, height to accommodate the engine and, in the S, a turbocharger.

All MINI Clubmen (?) house a 1.6-litre engine, in various formats. The £14,235, Cooper has a naturally aspirated, 1.6 petrol unit, as was the test car. The Cooper D has a 1.6-litre turbo-diesel engine with a Diesel Particulate Filter. While the Cooper D bears a price tag of £15,400, the Cooper S will set you back £17,210 and is powered by an intercooled, 1.6-litre petrol engine with a twin-scroll turbo-charger. The price also includes a go-faster, Sport button.