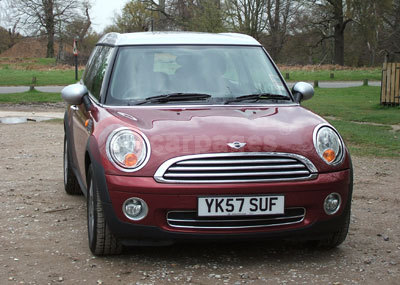 The new MINI was launched in 2001, to much acclaim. Although bigger than the original MINI, what it lacked in rear legroom, it made up for in unusual styling and a vast array of options.

The MINI Clubman has the same raft of options but its main benefit is the extra length, which should make rear passengers happier.

Based on the second generation MINI hatch, introduced between the end of 2006 and the beginning of 2007, the Clubman is 24cm longer, which is taken up by an extra 8cm between the front and rear seats and an increased boot capacity of 260-litres with the seats up and a maximum 930-litres with the seats folded. The best the MINI hatch can offer is 160- to 680-litres, so there is a fair increase in luggage space.

But all is not as rosy as it would first appear. The rear double doors, which are clearly a nod at the previous Clubman, are cleverly hinged as far out into the corners as possible. This is so that the rear light cluster is visible at all times, which is a legal requirement but they seem to be lacking in substance and the join point is wide enough to hide a motorcyclist, when using the rear-view mirror. MINI tells us that a flat load floor is an optional extra and, to be honest I have no idea what that means or why it would have an uneven floor in the first place - further investigation is needed.

The Clubman is the first MINI to have five seats, with two rear seats as a no-cost option. In reality having three rear seats is not an advantage as they still come with a 50:50 split and fold and there is definitely not enough room for three people; even if they are size 0, supermodels. The centre seat of three is no wider than some armrests and if your rear passenger in either of the outer seats is even a little on the plump side, they will have difficulty fastening their seatbelt because they will be sitting on the catch.

To make access to the rear seats easier, MINI has added a so-called Clubdoor. It is a 40cm, half-door. It has no outer handle to spoil the looks, because it hinges towards the rear of the car and interlocks with the full-size front door, that has to be opened first - similar to those in the Mazda RX-8. Please note the singular; the Clubdoor is only fitted to one side - the driver’s. While this is great in countries where they drive on the right, in the UK it means either parking on the ‘wrong’ side of the road or opening the front door wide into on-coming traffic, before getting the baby from its child seat or letting Granny out.

And therein lays another problem. Not surprisingly, Grannies are not as sprightly as younger people and they find it difficult to negotiate the driver’s seatbelt, which although it slides along a rail at the base, is attached to the top of the Clubdoor so it has to be held out of the way. The driver’s seat does move forwards, of course, to allow for more room to manoeuvre but, when it comes to getting granny out, she has nothing to pull against.

This is a 14-year+ news article, from our MINI archive, which dates back to the year 2000.