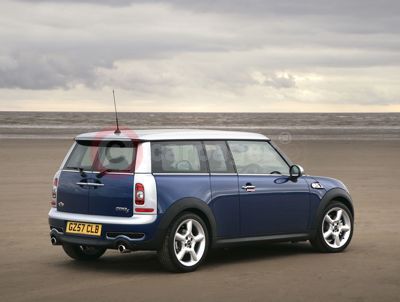 Why does the MINI Clubman have its ‘suicide’ opening rear door on the right hand side, which is the offside – or ‘wrong’ side – for right-hand drive cars?

It was a decision forced on the design team because of other engineering considerations, said Marcus Syring, head of exterior and interior design.

“When we increased the overall length by 120mm we realised we had room for an extra small door. We wanted to put the door on the left but that’s also where the fuel filler is,” he said.

Moving the filler behind the rear wheel to make room for the door was investigated but ruled out because of rear collision legislation in the USA, said Syring.The small door, which Syring calls a ‘Club’ door, isn’t just for people to get in and out of; it’s an easy way for the driver to put coats and bags in the back, he said, adding that reaction to the door so far “has been quite positive.”

Syring also revealed that three different door configurations were considered – a traditional estate hatch, a horizontally split tailgate with the bottom section folding down and the glass section upwards and a vertically split tailgate “like the old Traveller.”

The decision to go with the vertically split tailgate was unanimous when the three designs were presented to board members, said Syring.

Trevor Smithers, UK sales manager, said that 1,500 orders have been taken for the Clubman, which goes on sale in the UK on 10th November 2007. “These early orders are mostly from MINI owners or ex-MINI owners who are already alert to MINI,” he said.

He expects the Clubman to account for about one-in-five MINI sales. “This year we are going to sell between 47,000 and 48,000 MINIs and that will rise to about 50,000 next year,” said Smithers. Total annual production at the Oxford factory is 240,000 and 25 per cent are right-hand drive of which most stay in the UK, he said.