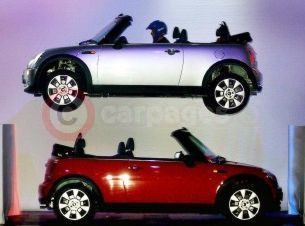 MINI Convertible put through its paces at Motor Show Live

The MINI stunt team is performing over 25,000 handbrake turns during the course of this year’s Motor Show Live.

Stunt supremo Russ Swift and two other highly trained drivers, including his 24 year-old son Paul, have spent weeks perfecting the MINI stunt show to wow crowds at this year’s Motor Show Live at the NEC. Using only standard production cars, the choreographed performance rolls out nine stunning shows every day throughout the two-week spectacle. MINI Open Air Theatre takes place in a specially constructed arena that has a seating capacity of 1000 people per show.

The finale sees Russ execute his first ever UK jump in the MINI Convertible. Over the entire show, the ‘flying’ MINI will travel the equivalent distance of seven football pictures in mid-air, or the equivalent height of the Blackpool Tower.

The theatrical stunt show pushes the MINIs to their limit. A specially designed floor covering saves the three-car extravaganza from a potential rubber burning 126 tyre changes, yet retains the crowd-pleasing screeching and smoking.

Russ, a former four times British Auto Testing Champion, said: "It’s great fun doing a display like this – it’s all about putting on a real spectacle for the crowd and showing off the MINI’s incredible handling. But I wouldn’t recommend people try any of the stunts we do at home!"

At this year’s show, MINI is taking on the theme of Open Air Theatre, putting on a show fit for any West End stage. With a display arena sized 75m x 32m, 250 spotlights, 150km of cabling, and a hi-tech lighting desk which has never before been used in the UK, the show really is a full scale production in itself.

MINI Cooper Convertible Images may not be UK specification cars. Colours and exterior and/or interior elements may differ from actual models.