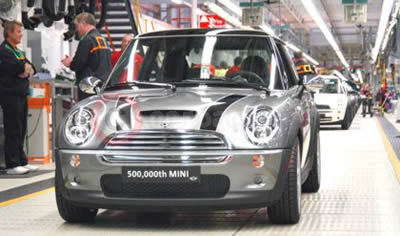 The 500,000th MINI has come off the production line at BMW Group Plant Oxford today, three years after the car first went on sale in July 2001.

More than 375,000 of the 500,000 MINIs have been exported representing over 75 per cent of the total produced since the launch of the car. The UK car export market is worth approximately £11 billion per annum* and MINI is the UK’s fifth largest car manufacturer.

The Rt. Hon. Andrew Smith MP, Secretary of State for Work and Pensions, was at the plant to see the car roll off the line. "This is a great moment for the workforce and British manufacturing. The MINI plant is a success story that is benefiting both the local and national economy."

Initial forecasts by the company predicted that the plant would build 100,000 MINIs a year, but worldwide demand has brought the half-million milestone two years early. Over 176,000 MINIs were sold in 2003 in 70 different markets from Thailand to Trinidad. 2004 is set to be another record year with 111,142 vehicles sold in the first seven months of 2004; an increase of four per cent compared to the same period in 2003. The UK remains the number one market for MINI.

Dr Anton Heiss, managing director of BMW Group Plant Oxford, said: "We have reached this achievement through the commitment and flexibility of the 4,500 employees at the plant. With MINI’s continuing sales success, we are on schedule to produce more vehicles than the 174,000 MINIs built last year."

The 500,000th MINI is a dark silver MINI Cooper S bound for America – MINI’s second biggest market after the UK. MINI USA organised for the lucky customer to collect his MINI from the Oxford plant. Dan Cowdry from California said: "It’s a real treat to see the home of MINI in Oxford, England but I’m really looking forward to showing the car to my friends back home."