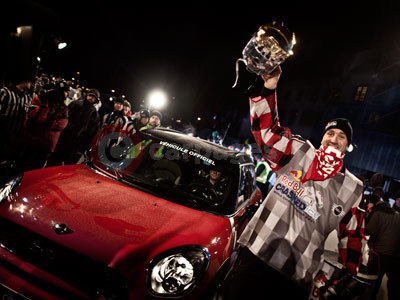 Arttu Pihlainen has become Red Bull Crashed Ice (RBCI) World Champion of 2011. At Saturday's final in Quebec, Canada he managed to prevail against tough competition from around the world to wild cheering from an enthusiastic crowd of spectators numbering around 110,000.

MINI was in on the action as official Automotive Partner of RBCI. Dr Manfred Braunl, president and CEO of BMW Group Canada, handed the newly crowned World Champion the key to his new MINI Countryman. The MINI Rookie Award for the best newcomer at the race in Quebec went to Canadian Philippe Poirier.

MINI is a keen promoter of young talent, which is why it introduced the MINI Rookie Award in 2011. The prize was presented four times during the Red Bull Crashed Ice World Championship.

At the opening event in Munich on 15th January 2011, Fabian Mels from Germany made his mark as the best newcomer: he put in a remarkable performance in all the races, finishing 34th in the final and taking 11th place overall after all four races. At the second event in Valkenburg, Netherlands on 5th February, Hrvoje Starjacki from Croatia took the rookie prize, while the third stage of the World Championship, held in Moscow, Russia on 26th February, saw Russian Pavel Kryukov presented with the MINI Rookie Award.