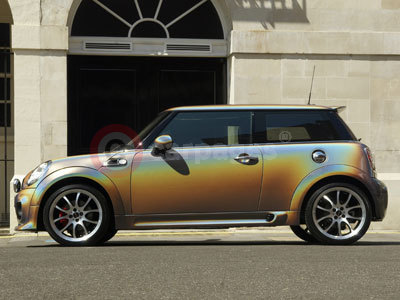 MINI models are to benefit from a wide of technical advances and personalisation options with effect from spring 2010.  At the top of the list are a new range of petrol engines that offer more power and torque while reducing both emissions and fuel consumption. MINI is also raising the customisation possibilities by offering a range of unique Rainbow colour options.

A new and improved version of the MINI petrol engine will be fitted to all MINI First, One, Cooper and Cooper S models in the Hatch, Convertible and Clubman ranges. The MINI First and MINI One models will now be fitted with a 1.6 litre engine, replacing the 1.4, and VALVETRONIC variable valve timing delivers a five per cent improvement on its own while an on- demand, map-controlled oil pump achieves a further 2.5 per cent fuel saving. An improved, low friction engine vacuum pump accounts for another one per cent and a map-regulated water pump working on a pulsed cycle (rather than simply on or off) saves 1.2 per cent fuel.

The entry-level MINI, MINI First, receives a new version of the 1.6 litre four cylinder engine that produces 75 hp, the same as its predecessor. The extra capacity has been designed to produce more torque which is higher by almost 17 per cent at 140 Nm. As a result fuel consumption in the EU cycle is 52.3mpg and CO² emissions 127 g/km. Top speed of MINI First is 109 mph while the 0-62 mph acceleration takes 13.2 seconds.

The new engine enables MINI One to increase both power (by three per cent to 98hp) and torque (by nine per cent to 153 Nm at 3,000 rpm). The efficiencies achieved through this new technology also deliver consumption of 52.3 mpg on the combined cycle while emissions fall to127g/km. On the road the true spirit of MINI is revealed with top speed rising to 116mph and zero to 62 mph acceleration taking just 10.5 seconds, a 0.4 second improvement.

The iconic MINI Cooper S model also gets more 'poke' with less 'smoke'. It is equipped for the first time with a twin-scroll turbocharger, direct petrol injection and fully variable valve control. The variable valve control is based on BMW's familiar VALVETRONIC system that adjusts valve lift and opening times in direct relationship to the driver's command on the throttle pedal.

The result is the most efficient hot hatch in its class:  the 1.6 litre unit produces 9hp more peak power at 184 hp while peak torque is 240Nm, delivered from as low as 1,600rpm through to 5,000rpm. This flexibility is enhanced by an Overboost function that delivers 260 Nm for short periods when it is most needed, for example when overtaking. The MINI Cooper S Hatch sprints from 0 to 62 mph in exactly 7 seconds on its way to a top speed of 142 mph, but it's not just about 'go'. It delivers improved EU cycle fuel consumption of 48.7 mpg (combined cycle) lower by 3.1 mpg, while CO² emissions are now 13 g/km lower at 136 g/km.

From April 2010 MINI will introduce a new level of customisation and expression for those who want to take personalisation to a new level. Three new Rainbow paint options will offer a deeper dimension of reflective quality than ever before seen on a MINI. A water-based basecoat colour produces an amazing rainbow effect in bright sunlight that changes the character of the MINI completely. Available in three different colours - Sunlight Metallic, Asteroid Metallic and Nightlife Metallic - these unique paint finishes open a new chapter in MINI personalisation.

Prices will be announced in March 2010 but, rest assured, it won't cost the pot of gold at the end of the rainbow.

If in doubt check with your local MINI dealer as car prices and technical data will have changed since 2010.